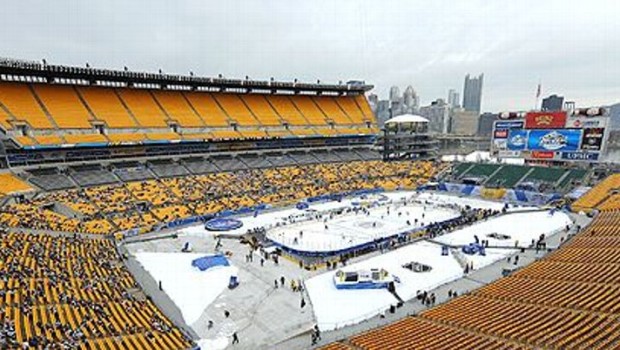 It might not be called the 2017 Winter Classic, but an outdoor game between the Flyers and the Pittsburgh Penguins seems more than likely.

The unresolved question is whether the game, probably to be held at Heinz Field in Pittsburgh (above), will stand as the 2017 Winter Classic or part of the Stadium Series held a few weeks later, a source familiar with the proceedings told ESPN.com

The two state rivals have been talking for months about a plan for an outdoor game or series of outdoor games. There was discussion about playing an outdoor game at Penn State, but it’s believed financial demands by the university soured the teams on the neutral site as an option, so the two franchises have been looking at a reciprocal arrangement with an outdoor game played one year in Pittsburgh and a second game in Philadelphia perhaps the next year.

The Winter Classic, usually announced by this time, has not been scheduled for next year in part because the NHL has to determine whether it is wise to allow Toronto to host the 2017 game when the city is also hosting the World Cup of Hockey this September and the World Junior Championship in late December, plus the Canadian Football League Grey Cup in November.

Heinz Field would be a viable option, given the close relationship between the Penguins and the Pittsburgh Steelers and the profile of the two franchises. But timing might be an issue. If the NHL is determined to have the game on New Year’s Day, it’s unlikely the Steelers would give up their field as Jan. 1 is the final Sunday of the NFL regular season and, if the Steelers ended up hosting a wild-card game the next weekend, there would be concern about reclaiming the field.

It’s believed that if the NHL agreed to hold the Winter Classic on Dec. 31, the timing could work.

The NHL previously altered the schedule for the Winter Classic, generally held on New Year’s Day, to avoid conflict with the NFL in 2012, when the game in Philly was moved to Jan. 2.

Pittsburgh and Philly have each hosted one Winter Classic, the Flyers hosting the New York Rangers in 2012 and Pittsburgh hosting the Washington Capitals in 2011 at Heinz Field.