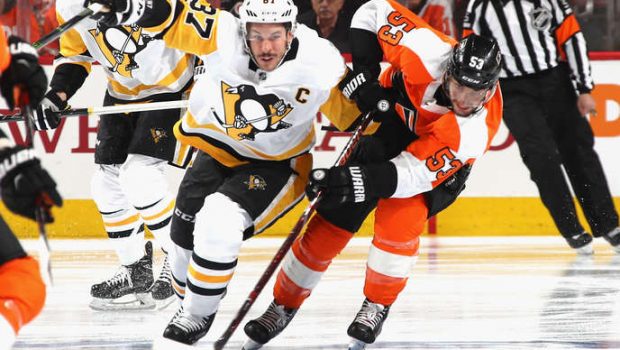 HOW THE FLYERS’ PENALTY KILL IS KILLING THEIR PLAYOFF HOPES!

While the Flyers and Penguins rest until tomorrow night’s game 4 at the Wells, a key reason the Pens are up 2-1 in this playoff series is:

While Pittsburgh did score three goals on seven chances with the man advantage in game 3, Flyers star players Sean Couturier, Shayne Gostisbehere and Ivan Provorov were exhausted from trying to stop Sidney Crosby and Evgeni Malkin.

But coach Dave Hakstol was available to break down what went wrong in Game 3, and much of it centered on the penalty situation:

“Last night we just never got ourselves back on track, and I think a lot of that has to do with the energy we spent on the PK (penalty kill), and we never did re-establish our game,” Hakstol said.

“There were a couple of spurts in the second period, especially once we made it 4-1, if we’re able to have a good five-minute push there and get one more, you never know what could have happened. But I didn’t think we really re-established last night. I don’t think that’s characteristic of our team, but we did not do it last night.”

Hakstol left the door open for possible line-up changes but it’s not like he’s got Peter Forsberg or John LeClair waiting in the wings.

Up front, Jordan Weal could make his first appearance of the playoffs. On defense, the only options are rookie Robert Hagg and veteran Johnny Oduya.

Regardless of who plays, it’s clear the Flyers have to stay out of the box. If the officials are going to call games a bit tighter in the playoffs, so be it.

“In last night’s game, I said it after the game – I thought the call on G (Claude Giroux, for slashing, leading to a Malkin goal to make it 3-0), and that was a critical power play goal for them — I still don’t think that was a penalty, but at the speed of the game, things get called,” Hakstol said.

“G tapped his stick, the stick comes out of his hand and that’s one that when that happens a lot of times it gets called. But my point is, beyond that, I thought they were penalties. We had our sticks where they shouldn’t be and we took a too many men on the ice penalty. Again, that is what it is, whether it’s regular season or three games into the playoffs.”

“We have to be better with our play with the puck,” Hakstol said. “You saw a small sample of that in the first period. It’s one thing to do it for 20 minutes, but we really have to challenge ourselves to do that over a 60-minute period.

“We’ve consistently been at the net,” he said. “I don’t think that’s been the issue. It’s more so possession in the offensive zone. They defend quick. They get five guys around the puck defensively really quick and they do a good job, so you’ve got to be sharp there.

“For me it hasn’t been getting traffic to net front. I think we’ve been there, but we haven’t consistently gotten enough pucks there when we have the traffic.”