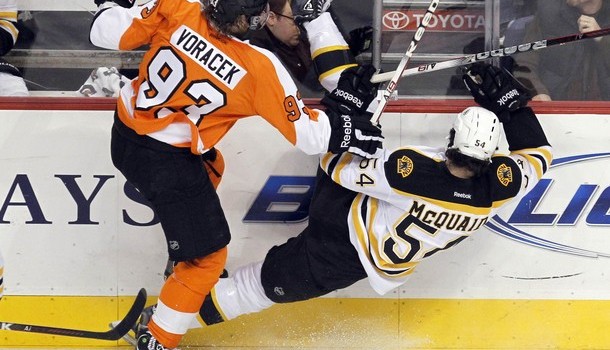 If the Flyers have any hope of making the playoffs, they have to beat the team ahead of them in the Eastern Conference.

They started doing that Thursday night when they downed the Washington Caps, and next up are the Boston Bruins, who have taken the last four matchups heading into Saturday’s encounter in which both clubs seek a third straight victory.

Phillly (16-18-7) won 2-1 in a shootout over Ottawa on Tuesday and 3-2 in overtime over Washington on Thursday to start this four-game homestand. With 50 points, the Capitals occupy one of the Eastern Conference wild-card slots while the Bruins (21-15-6) hold the final one with 48.

”These next 20 games mean a lot,” center R.J. Umberger said. ”If you get into March and you’re nine points out, you’re in trouble. We need to make up a lot of ground here in the next 20 games.”

Jakub Voracek (photo above) has four points – all assists – during the 0-3-1 stretch against Boston. The teams’ only meeting of the season came in the opener Oct. 8, a 2-1 Bruins win on Chris Kelly’s goal with 1:51 left.

Tuukka Rask made 19 saves to give him a 7-1-1 mark and 1.75 goals-against average in nine starts against the Flyers.

Rask stopped 37 shots in Wednesday’s 3-2 overtime win at Pittsburgh before being rested in favor of Niklas Svedberg the next night. Svedberg earned his second shutout in a 3-0 home victory over New Jersey in which Boston held a 43-14 edge in shots.

”I thought that right away we had a strong game,” center Patrice Bergeron said. “We limited their chances and their shots on net and I thought we had a lot of good looks and good chances.”

Bergeron has four points in his last three games and leads the club with 31.

The Bruins played without Loui Eriksson, who missed his first game of the season with an upper-body injury. Eriksson, third on the team with 25 points, took part in Friday’s practice.

Flyers defenseman Nicklas Grossmann will miss about three weeks after he suffered an upper-body injury in the first period Thursday. Grossmann, who has yet to miss a game, had his right shoulder slammed into the boards and had to be helped off the ice.

Steve Mason, who left Wednesday’s practice early with soreness, seeks his first three-game win streak since Nov. 4-6. He is 3-2-2 with a 2.25 GAA in seven starts against Boston.

Mason has made the most day starts in the league over the last two seasons with 17, winning 10 times. Rask is second with 15, including nine wins and an NHL-best 1.76 GAA in those contests.

The Bruins are 0 for 14 on the power play in their last six road games. The Flyers are among the worst penalty killing teams in the league at 74.8 percent.