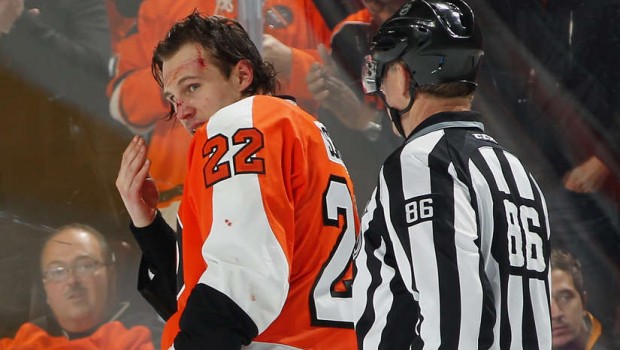 FLYERS’ PASSION PLAY PUTS PENS DOWN 3-2 AT THE WELLS

If only the Flyers played every game with the urgency and passion they bring to confrontations with their cross-state rival Pittsburgh Penguins.

Maybe they wouldn’t be so far down in the standings.

Flyers captain Claude Giroux scored a power-play goal with 1:03 remaining in overtime to give the Flyers a 3-2 win against the Penguins at Wells Fargo Center on Tuesday.

Penguins goaltender Thomas Greiss stopped a shot by Jakub Voracek but left the rebound loose. Giroux reached into the pile and scored.

Luke Schenn and Chris VandeVelde scored for the Flyers (19-22-7). Goalie Ray Emery made 33 saves, including 17 in the first period.

Chris Kunitz and Beau Bennett scored for the Penguins (26-12-7), and Greiss made 37 saves.

Penguins defenseman Kris Letang left the game in the first period because of an undisclosed injury sustained on a hit by Flyers forward Zac Rinaldo.

The Flyers skated most of overtime on the power play after a cross-checking penalty on Zach Sill at the buzzer to end the third period and a bench minor on the Penguins for too many men on the ice at 2:04 of OT.

Philly, which has the best home power play in the NHL, finally scored on its sixth man-advantage of the game.

It was a level the Flyers have lacked for most of the season, and one reason they’re 11 points behind the Boston Bruins for the final Eastern Conference wild-card spot into the Stanley Cup Playoffs.

“It’s hard to play this way for every game for 82 games,” Voracek said. “It was a very emotional game. It was a battle for 60, 64 minutes. Obviously. if that’s the way we’re going to win the games, we have to play like that every game. … Sometimes you have teams where they don’t fight or don’t hit as much as [the Penguins]. Sometimes you have to find a different way to win the games. I don’t know why it’s like that against the Penguins every time.”

The Flyers gained momentum Tuesday from their penalty kill. They entered the game with the NHL’s 30th-ranked penalty kill but had their best man-down game of the season, killing all six Penguins power plays.

That included the five-minute major assessed to Rinaldo late in the first period for the hit on Letang that carried over into the first 36 seconds of the second. The Flyers allowed four shots on the major and eight shots on the power play.

The Penguins, who were 5-for-11 on the man-advantage in their previous four games, saw special teams as a missed opportunity. Losing Letang, the quarterback on the top unit, obviously hurt, but Paul Martin replaced him with Sidney Crosby, Evgeni Malkin, David Perron and Chris Kunitz.

“We’ve had to play without [Letang] for extended periods of time,” Crosby said. “We don’t want to use that as an excuse. He’s obviously very good for us, but with the skill we have we should make them pay for that.”

The Penguins carried play at the start, outshooting the Flyers 17-3 in the first period but trailed 1-0 on Schenn’s floater from the point through traffic that came off a Bennett turnover.