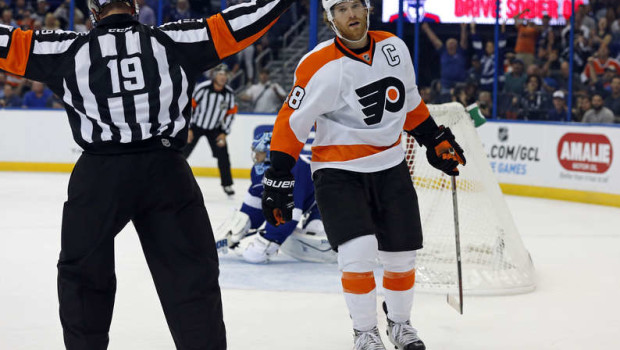 “We’re not happy about the result, but I think we played the way we wanted to,” Flyers captain Claude Giroux (above) said. “And as the game went on, we got better and kind of got more comfortable in how we want to play and how we want to look as a team.”

Let’s be fair to the Flyers.

It was only the first game of the 2015-16 season and the opponent was the defending conference champion Tampa Bay Lightning.

But this year’s orange and black already seems haunted by the memory of last season’s inability to win in OT!

Jason Garrison scored 2:17 into the NHL’s first 3-on-3 overtime to give the Lightning a 3-2 season-opening win against the Flyers at Amalie Arena on Thursday.

Each team had several scoring chances in the fast-paced overtime. Lightning goalie Ben Bishop stopped the Flyers’ Scott Laughton on a penalty shot at 1:27 before Garrison ended it with his second goal of the game on a backhand shot on a breakaway against Flyers goalie Steve Mason.

Garrison joked that the last time he had a breakaway was “probably in Pee Wee.”

“It’s always nice when you find the back of the net,” Garrison said. “I thought the team played really well, and we created a lot of chances for ourselves, so it was a big win for us.” The Lightning took a 1-0 lead at 1:25 of the second period when Garrison scored with a wrist shot from just inside the blue line. Callahan and Jonathan Drouin got the assists on the goal, which was helped by a Steven Stamkos screen on Mason.

The Flyers tied the game 1-1 with 9:46 left in the second when Read went five-hole on Bishop to finish a give-and-go with Laughton.

“There’s no freebies in the League,” Lightning coach Jon Cooper said. “I think a lot of the good teams in the League last year are still good teams and a lot of the teams that didn’t make the playoffs last year made themselves better. So I don’t think there’s going to be a huge gap between the first-place team and the 12th-place team. Philadelphia is a heck of a team. [They] are probably sitting over there saying, ‘How did we not win that game?'”

Less than two minutes after Read’s goal, the Flyers took a 2-1 lead when Schenn scored on the power play. Defenseman Evgeny Medvedev took a shot from the point that deflected off of Bishop, and Jakub Voracek cleared the loose puck to Schenn, who scored on the stick side.

“We’re not happy about the result, but I think we played the way we wanted to,” Flyers captain Claude Giroux said. “And as the game went on, we got better and kind of got more comfortable in how we want to play and how we want to look as a team.”

Tampa Bay evened the score 2-2 on a power-play goal from Callahan after he gathered the loose puck off a shot from defenseman Victor Hedman.

“The one thing [Drouin] can do is find his way on the score sheet,” Cooper said. “You like that about players. You look up and he’s got two points and helped generate offense. That’s a good sign. He’s done that his whole career coming up.”

Bishop made 23 saves, including on the penalty shot against Laughton with the game on the line. Giroux missed a penalty shot in the first period.

“Two penalty shots in a game is pretty rare; that’s never happened to me,” Bishop said. “But it was a big one in overtime, obviously, to get the save and go down and score right then. So we’ll take the win at home in front of these fans. It was a special night with the banner revealed and it’s nice to get a win for these fans.”

“It was a great effort overall; we probably could have come away with two points,” Mason said. “The guys can look at themselves in the mirror and be happy with the overall effort here.”

It was Dave Hakstol’s first game as Flyers coach.

“I thought we played a good 60-minute hockey game,” said Hakstol, who was coach at the University of North Dakota for the past 11 seasons. “That’s what we’ll go back to. We’ll learn a little bit from the 3-on-3 overtime. We tried a little too hard to make things happen.”