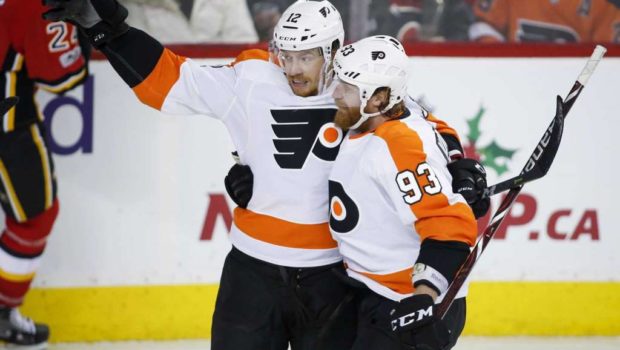 FLYERS-OILERS TONIGHT: ONE TEAM HAS TO WIN!

The Flyers snapped a 10-game losing streak with a 5-2 win at Calgary on Monday and are in Edmonton tonight to play the Oilers.

“It’s been a long stretch,” Flyers winger Jakub Voracek, who tops his team with 33 points in 27 games, said of breaking the losing skid that lasted almost a month. “Tough one. It’s one game. Now we fully expect to win on Wednesday. We have to play the same way. We have to be ready. It’s going to be a tough matchup again.”

Flyers center Scott Laughton said, “We came together as a group. It’s nice to get this one. We have to have a short memory and go into Edmonton, and I think we’ve got to start a little streak of our own and get back into the swing of things.”

The Flyers are at 9-11-7, the worst record in the Metropolitan Division. The Oilers are next to last in the Pacific Division at 11-14-2.

“They’ll be a desperate team,” said Edmonton center Mark Letestu, who has scored in each of the Oilers’ past two games. “They’re no different than us, they’re looking up at a lot of teams in the standings, whether it be league or division. They need points just as badly as we do. And we owe them one, they got one late on us in Philly.”

Letestu was referring to his team’s Oct. 21 visit to Philly, where Wayne Simmonds scored the deciding goal with just 2:15 left in the game. The 2-1 squeaker clearly hasn’t been forgotten in the Edmonton locker room.