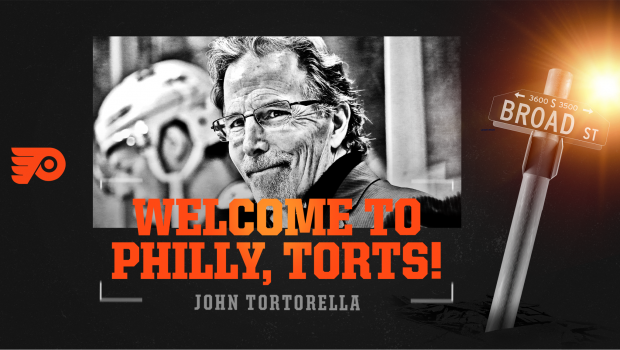 The Flyers today named John Tortorella as their head coach.

“I am very excited to be joining such a historic and well-respected franchise like the Philadelphia Flyers,” Tortorella said in a statement.

“From my very first conversation … I knew this was the right fit for me and I believe in the direction this team is heading. Having faced the Flyers for several years, I know firsthand how tough of a city Philly is to play in and I look forward to being on the right side of the bench on opening night in front of such a loyal and passionate crowd of Flyers fans.”

In 2004, he led the Tampa Bay Lightning to their first Stanley Cup Championship in franchise history after going 16-7 in the postseason and defeating the Calgary Flames 4 games to 3 in the Stanley Cup Final.

A native of Boston, Mass., Tortorella ranks second all-time among U.S.-born coaches with his 673 wins, which is also 13th all-time in NHL history. He was the first U.S.-born coach to 500 regular season wins.

Tortorella was most recently the head coach of the Columbus Blue Jackets for six seasons, where he posted a 227-166-54 record. He is the all-time leader in Blue Jackets history in games (447) and wins (227). He spent the 2021-22 season as an analyst for ESPN broadcasts.

Internationally, he served as head coach for USA Hockey at the 2008 IIHF World Championships and the 2016 World Cup of Hockey.

He has also been an assistant coach for the U.S. Olympic Men’s Ice Hockey Team that earned a silver medal at the 2010 Olympic Winter Games in Vancouver, and an associate coach for the U.S. Men’s National Team at the 2005 IIHF Men’s World Championship in Vienna and Innsbruck, Austria.

Tortorella has also had success at the American Hockey League and Atlantic Coast Hockey League (ACHL), winning the league championships with the Rochester Americans (AHL) in the 1995-96 season and the Virginia Lancers (ACHL) in the 1986-87 campaign.