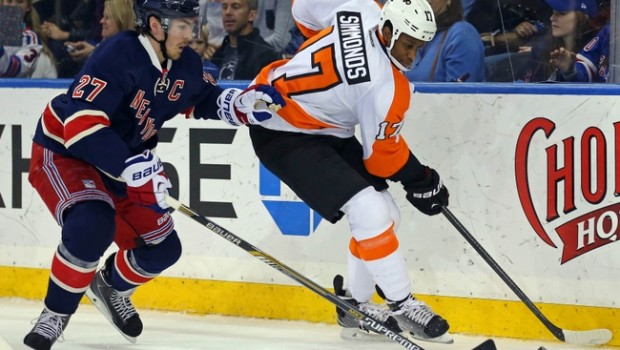 CAN FLYERS STOP THEIR BLEEDING AGAINST RANGERS TONIGHT?

The Flyers have gotten tantalizingly close to the Boston Bruins in their race to make the NHL playoffs, but now after losing in Carolina and Toronto they are six points back.

Which makes tonight’s game at the Wells against the New York Rangers even more crucial than it looked a week ago.

Chris Kreider and Lee Stempniak each scored twice and Cam Talbot made 37 saves.

“If you want to be near the top of the standings in this league, you need to find ways to win,” Kreider said. “That was definitely a bit of a nail-biter and a little too close for comfort, but it speaks volumes of the leadership and character.”

The Rangers certainly haven’t made it easy on themselves. Talbot allowed a first-minute goal for the third time since taking over for injured No. 1 goalie Henrik Lundqvist, and New York has given up three or more nine times in the past 14 contests.

Despite that, the club has won four in a row and is pushing the Islanders for first place in the Metropolitan.

“We pride ourselves in coming out the right way, and our first periods have been good, but (Thursday) for whatever reason we didn’t start out the way we wanted,” coach Alain Vigneault told the team’s official website. “Again, this game is about finding ways to win and that’s what we did.”

The Flyers (26-25-11) desperately need to starting doing it. Philly is struggling to keep pace with Boston in the fight for the second wild card and also needs to pass Florida while holding off Ottawa.

The club hasn’t displayed a sense of urgency of late, losing two in a row and going 3-3-3 in its last nine. The Flyers fell 3-2 at Toronto on Thursday, the seventh time in that span they’ve managed two or fewer non-shootout goals.

This one wasn’t for lack of trying, as Philly held a 49-17 shot advantage but was mostly frustrated by Jonathan Bernier. The Flyers posted their highest shot total in a regulation loss since 1991.

“We feel like we deserve better, but at the same time those games are going to happen,” center Brayden Schenn said. “Some nights you are going to play great and get no points and other nights you may play poorly and get points.”

The Flyers haven’t come all that close to earning any against the Rangers this season, getting blanked twice and losing the most recent matchup 5-2 at Madison Square Garden on Nov. 29. New York has won four consecutive meetings and five of six, limiting Philly to four goals in the defeats.

Talbot, expected to be in net, earned both shutouts of the Flyers this season and is 2-1-0 with a 0.67 goals-against average in three career starts in the series.