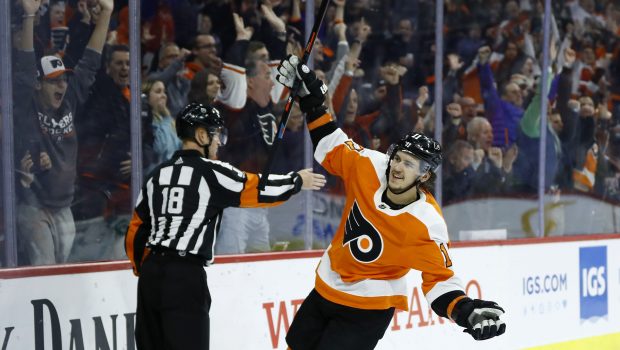 Kevin Hayes had two goals and Travis Konecny and Nicolas Aube-Kubel also scored to lift the Flyers to their fourth straight win, 4-2 over the San Jose Sharks.

Kevin Hart stopped 26 shots and the Flyers have won nine of 12 games and are fifth in the Eastern Conference.

“We are going to have some good games to see how good we are,” Flyers coach Alain Vigneault said.

The next two weeks are pivotal for the Flyers — four straight against Metropolitan Division teams, and then three more against Eastern Conference teams that could determine if the Flyers can truly make a push up the standings. The Flyers missed the playoffs last season and haven’t reached the second round since 2012. In Vigneault’s first season in Philly, the Flyers got hot in the second half and made a pair of trade deadline deals to bolster their depth. Derek Grant and Nate Thompson, a pair of veteran centers, made their Flyers debuts.

“Seems like they’re having a lot of fun,” Thompson said. “It’s fun to be a part of. We just need to keep it going, but it’s a good time.”

“I think we are understanding the right way to play and how to manage the game and understand the game that is in front of you,” he said. “That usually leads to improvement in a team, which I think we have done. I think we have improved as a group all year long. Some guys more individually than others. But as a team, I think we have definitely taken steps.”

San Jose captain Logan Couture, who had 36 points this season, returned from a broken ankle suffered on Jan. 7, but couldn’t help the Sharks avoid their fifth straight loss. The Sharks went 7-10 in Couture’s absence.

“I knew my hands weren’t gonna be great,” he said. “I figured it’s been a rough couple days.”

Indeed, with San Jose’s season going nowhere, the Sharks traded forwards Patrick Marleau to the Pittsburgh Penguins and Barclay Goodrow to the Tampa Bay Lightning at the deadline.

Hayes also had an assist for the Flyers to send them on the way toward their fourth, four-game winning streak of the season. The Flyers have gone goal crazy of late, scoring three or more goals in nine straight games and 14 of 15 to move into the top 10 of the league in goals-per-game.

They wasted little time when Aube-Kubel beat Aaron Dell on the power play just 1:32 into the game for the lead. Joel Kellman tied it 1-all midway through the first.

Hayes’ slapper from the circle for his 20th goal of the season made it 2-1 early in the second and Konecny scored his 22nd for the 3-1 lead. Hayes scored on a dribbler (the Flyers 79th this season in the third period) between Dell’s legs early in the third.

The Sharks made it 4-2 on Noah Gregor’s one-timer after Claude Giroux failed to clear the puck.