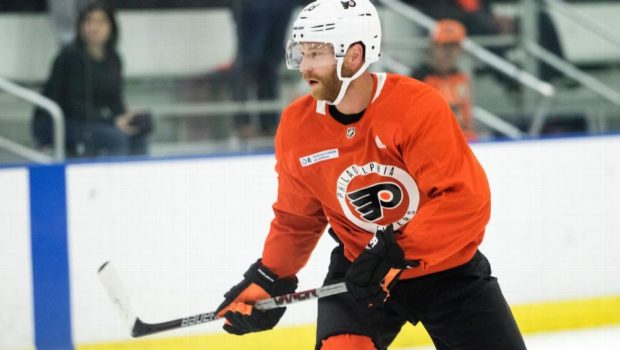 FLYERS WILL FINISH NO BETTER THAN 6TH IN METRO, ESPN SEER SAYS!

CASE FOR: On paper, the Flyers look like a team caught between building around players in their prime — veteran forwards Claude Giroux (above), Wayne Simmonds and Jakub Voracek — and one in complete rebuild mode. If second-year forward Travis Konecny (11 goals in 2016-17) can double his offensive output as a top-line left winger, and if rookie Oskar Lindblom can be just as dominant in his first NHL season as he was in his last season in the Swedish Elite League (22 goals, 47 points in 52 games), and if Elliott and Neuvirth can erase a high percentage of mistakes made by a young defensive corps, the Flyers have a shot at sneaking into the playoffs. Simmonds is coming off a pair of dominant seasons in which he has averaged 31 goals and 57 points, becoming a goaltender’s worst nightmare in the crease.

CASE AGAINST: If Giroux, Simmonds or Voracek regress in any way, it could be another short season in Philly. At 29, Giroux should be in the prime of his career. But with five years remaining on a contract that carries an $8.3 million cap hit, many are beginning to wonder if the captain is approaching the twilight of his career. Giroux is coming off his worst statistical season (14 goals, 58 points) since his first full season in the NHL in 2009-10. His nine even-strength goals and 26 even-strength points also are career lows. Many blamed Giroux’s poor season on offseason hip surgery and a rehab cut short by the World Cup. It’s no coincidence that Gostisbehere, who also underwent offseason hip surgery, also lacked the jump needed to be the dominant player he was as a rookie. The Flyers simply don’t have enough reliable forwards, defensemen and goaltenders to make a serious run this season, but they are certainly headed in the right direction: