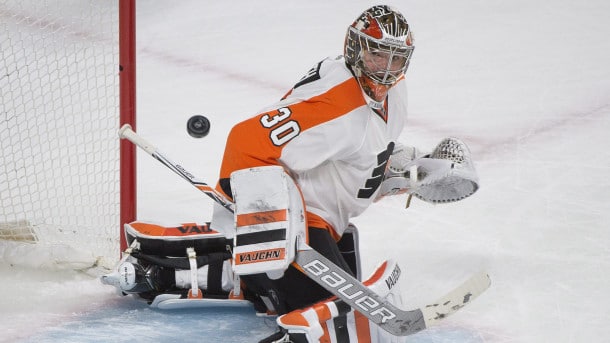 FLYERS’ NEUVIRTH SHOULD EXPECT A FAST START FROM CAPS TONIGHT

Flyers goalie Michael Neuvirth will face a special challenge tonight as he tries to extend the Caps series to a sixth game at the Wells fargo Center on Sunday.

On the verge of elimination, the Flyers made a desperation move by turning to goalie Neuvirth in game 4 over Steve Mason.

Neuvirth was able to turn aside 31 shots, backstopping the Flyers to a 2-1 win.

“Neuvy was great when he had to be [in Game 4] so you’ve got to give him credit,” Karl Alzner said.

As good as Neuvirth was at points, his task was made easier by the Caps who allowed the Flyers’ netminder to settle into the game before they began to really pressure him.

The Caps managed only two shots on goal in the first ten minutes of the game against a goalie who, prior to Wednesday’s game, had only played in three games since the start of March. When Washington finally did get shots on net, there were from the outside with little traffic. Neuvirth wasn’t really tested until the latter half of the game.

“We were too perimeter,” Wilson said. “The perimeter shots he gloves, he uses his pad. They’re easy saves. He doesn’t feel like he’s under fire. We did a great job in the first three games of making Mason feel like he was under fire and we got to do a better job of kind of getting into the interior and making tougher shots on Neuvy.”

The difference for the Caps early in the series was the power play. In the first three games, the Caps had 17 power play opportunities, an average of over five per game, and scored on eight of them. In game 4, a more disciplined Flyers team gave up only two power plays and the Caps were not able to convert on either.

With their backs against the wall heading into a hostile Verizon Center for Game 5, as well as the increased attention to after the whistle hits the Caps are calling for after Game 4, chances are the Flyers are going to be on their best behavior to avoid giving more opportunities to the Caps’ lethal power play unit.

What will the formula be for the Caps then for beating Neuvirth without the extra man? Simple: More traffic and more shots.

“It’s traffic,” Alzner said. “Getting guys in front of the net. We were just watching some video of a lot of chances that we passed up coming into the zone where we could’ve shot and drove the net and had guys in front. Just got a little bit too fancy I think. That’s hard for any goalie to deal with a lot of pucks going towards him.”

It sounds like a simple formula, but it’s one the Caps were unable to follow in Game 4 and it cost them.