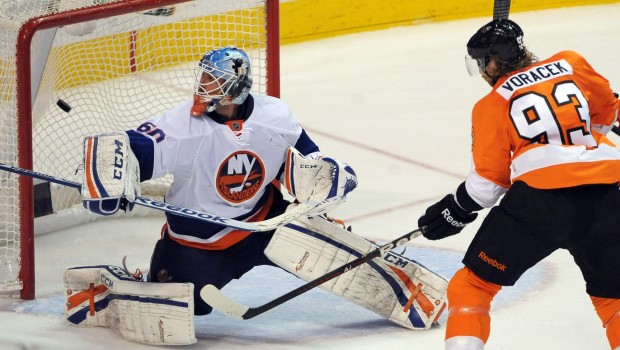 FLYERS NEED TO STEAL A GAME THIS AFTERNOON AGAINST ISLES

With the All-Star break on the horizon, wouldn’t it be nice if the woeful Flyers could steal a win in a Martin Luther King holiday matinee?

Trouble is, their opponent at 1 pm today is the Islanders (30-14-1), who are guaranteed to hold first place in the Metropolitan Division heading into the break. They’ve been working plenty for it lately, though, as this will be their third game in four days and fourth in seven.

New York allowed a goal less than two minutes into the first period against Montreal on Saturday and played catch-up the rest of the way in a 6-4 loss that snapped a four-game winning steak.

”I’m not going to use (the packed schedule) as an excuse,” coach Jack Capuano said. ”We’ve played a lot of hockey, and when you play a lot of hockey, the best thing you can do is simplify your game. We did not simplify our game.”

New York looks to head into the break on a positive note by beating the Flyers (18-21-7) for the second time this season. Frans Nielsen and Tavares, who has six goals and two assists in his last eight against Philadelphia, scored in the shootout to give the Islanders a 1-0 victory Nov. 24.

Steve Mason made a season-best 46 saves for Philly, but he’s out at least two weeks with a knee injury. Rob Zepp made his fourth career start Saturday and stopped 24 shots in a 4-3 win over Buffalo.

The Flyers had dropped three of their previous four. R.J. Umberger scored in the second period to end a goal drought of 168 minutes, 50 seconds, the fourth longest in team history.

Former Islanders defenseman Mark Streit also scored for the Flyers, who are fourth in the Metropolitan, 13 points behind Washington and the Rangers.

”No one likes our situation in the standings,” Umberger said. ”But we’re still playing hockey for a living, so we’re going to have fun and dig ourselves out of it one game at a time. With the right attitude that’s how we can do it, and I think we had it (Saturday).”

Ray Emery could start in net in this contest. He’s lost his last four appearances with a 4.76 goals-against average, but is 7-0-2 with a 1.74 GAA in nine career games against the Islanders.