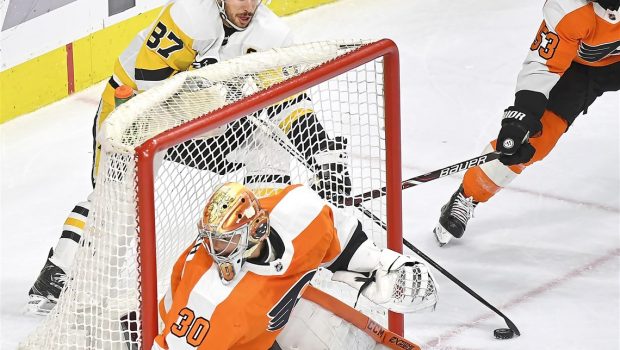 This was a game the Flyers had to win.

Otherwise they would be staring into the apocalypse of a 3-1 deficit to the defending Stanley Cup champs Pens.

So, the crowd at the Wells last night expected big things from the Orange and Black.

Instead, they saw the Flyers sleep-walk throughout a 5-0 rout.

And they reacted predictably:

As in Flyers coach Dave Hakstol.

Sidney Crosby passed Mario Lemieux in Pittsburgh’s record book and pushed the Flyers to the brink of elimination.

Crosby scored his fifth goal of the series and became the Penguins’ career postseason points leader.

The Penguins lead the first-round playoff series 3-1 as its shifts to Pittsburgh for Game 5 tomorrow night. Crosby and the Penguins followed a 7-0 Game 1 victory and a 5-1 Game 3 victory with another dominant outing.

Matt Murray stopped 26 shots for his second shutout of the series and the two-time defending Stanley Cup champion Penguins are one victory away from playing in the second round for the 11th time in the last 12 seasons.

Crosby scored in the second period for a 4-0 lead and topped Lemieux, the team owner and Hall of Famer, for most playoff points with 173.

“A lot of his records aren’t going to be touched,” Crosby said. “The fact I can be close to him and around that one, I guess I’ve been fortunate to play in a number of playoff games helps a lot.”

The Flyers were already on their second goalie by the time Crosby scored. The Penguins chased Brian Elliott early in the period after the maligned goalie allowed his 14th goal of the series. Michal Neuvirth relived Elliott and it didn’t matter. Neuvirth lost track of the puck behind the net and had his head turned to the right when Crosby found it and snapped it under the goalie’s left skate.

“I was in a good spot. The puck ended up right on my stick,” Crosby said.

The Flyers were confused. The Penguins were composed.

And it so it goes in Philly, as the Flyers are a loss away from another empty season without the Stanley Cup.

“Somehow, we need to get our confidence back and go from there,” team captain Claude Giroux said.

Disgruntled Flyers fans chanted from the balcony to the concourse for the Flyers to fire third-year coach Hakstol.

Both teams played without key cogs in their lineup: Sean Couturier (who had career highs with 31 goals and 76 points) was injured Tuesday at practice in a vicious collision with teammate Radko Gudas; the Pens played without top-line forward Patric Hornqvist because of an undisclosed injury.

Giroux, who scored 102 points during the season, has not scored a posteason goal since 2014.

“One game away for the season to be over,” Giroux said. “You can expect this team to have some fight the next game.”

The Flyers pulled out all their good-luck charms.

The national champion Villanova Wildcats were in the house and star guard Phil Booth screamed “Are you ready for some hockey?”

Flyers fans heard the usual stirring rendition of “God Bless America,” live by Lauren Hart and on video by the late Kate Smith. The song has been a rallying anthem for the Flyers since Smith began singing it in the mid 1970s. Hart started the song, then looked up to the big screen and passed it off to Smith. They finished in a split-screen duet.

Once the pageantry settled down, the Penguins poured it on.

Crosby’s on-point pass on the power play led to Evgeni Malkin’s third goal of the playoff just 4:33 into the game. Phil Kessel scored his first of the postseason midway through the period. Kris Letang made it 3-0 in the second and that was all for Elliott.

Riley Sheahan made it 5-0 late in the third. Neuvirth stopped 11 of 13 shots in relief.

“We won in their building on the second game so that’s the attitude we’re going to take,” Neuvirth said.

Murray was solid again, and stoned Travis Konency on a breakaway out of the penalty box in the second that had the second-year center slam his stick on the ice in anger.

“They had their chances, at times,” Murray said. “But we got the job done.”