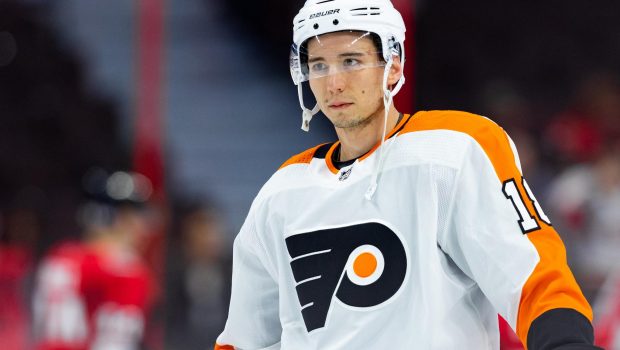 FLYERS MOVE PITLICK UP FOR CONCUSSED KONECNY ON TOP LINE

Travis Konecny is out indefinitely with a concussion, so the Flyers have move Tyler Pitlick up from the fourth line to the line with team captain Claude Giroux on left wing and Morgan Frost in the middle.

James van Riemsdyk will start tonight in Colorado on a line with Mikhail Vorobyev and Chris Stewart. With the Flyers taking only 12 forwards on the trip, Stewart will return to the starting lineup for the first time since Nov. 16.

Coach Alain Vigneault said he also considered moving up van Riemsdyk at five-on-five — and still may if the in-game situation dictates it — but there were two specific reasons he opted for Pitlick.

“It had to do with two things: balance of the lines and comfort of the position. There’s no doubt that Tyler has been playing well and working extremely hard. But JVR has also been playing hard. So that’s where my dilemma was,” Vigneault said.

Pitlick does have experience in the NHL playing with a team’s skill players. During a breakout season in Dallas in 2016-17, he spent a spell on a line with team captain Jamie Benn at a time when Benn was struggling and both Pitlick and Radek Faksa were playing their best hockey of the season.

“That’s not something that I think I don’t have in my toolbox,” Pitlick said. “I think I have the skill to do it. But I can’t change my game. I need to grind it, chip pucks, skate hard and keep doing the little things I’ve been doing.”

The second reason for the decision: the fact that James van Riemsdyk exclusively plays left wing (the same side preferred by Giroux) and Pitlick is more comfortable at right wing than left factored into the decision.

For his part, Stewart is happy to get back in the lineup.

“The boys are rolling. We’ve got four lines going. The D is playing great. And it doesn’t matter which guy we’ve got in the net right now, they’ve both been getting the job done…. That’s a situation where it’s great to get in the lineup,” Stewart said.