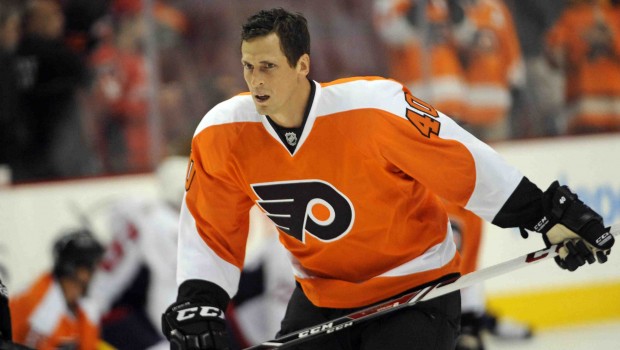 FLYERS’ BIGGEST PROBLEM — THEIR PLAYERS ARE NOT GOOD ENOUGH!

A good example is Vincent Lecavalier (photo above), who had a horrible season, scoring eight goals in 57 games. He has three more seasons left on his contract but isn’t sure if he will be back with the Flyers next season. Why would the team want him back? He can’t play anymore!

Excuse me, while I stop laughing.

After hearing the Flyers talk on Monday about how much they missed Kimmo Timonen, who missed the whole season with blood clots, and listening yesterday to GM Ron Hextall’s Dear in the Headlights presser, you might think the Flyers are:

Just a couple of players away from contending for the Stanley Cup!

The Flyers believe a lack of consistency in a number of areas is what doomed them to miss the Stanley Cup Playoffs.

Playing harder didn’t cure those ills. Instead of more hard play, what they needed was better players.

During their final media availability Monday at their practice facility, a number of the players cited the season-long absence and eventual trade of defenseman Timonen as a big reason for their inability to fix issues as they arose.

“Kimmo was such a big presence in the locker room,” forward Jakub Voracek said. “Since I was here every time things didn’t go well, we’d have a meeting about it and he always calmed things down. He was being hard on us as well sometimes. As a team we need to get better and I think that’s what we were missing.”

Timonen, 40, sat out the majority of the season after being diagnosed with blood clots in his right leg and lungs. When he was cleared to return in February, and with the Flyers’ playoff hopes at that point looking dim, Timonen was traded to the Chicago Blackhawks. After his departure Feb. 28, the Flyers went 6-6-7.

“I think Kimmo had such a big effect on everything,” forward Wayne Simmonds said. “He played the game a long time and he was such a calming influence. When he said something, you’d listen. Whether he was on the ice, he could just calm the game down. Whether it was in the dressing room — he didn’t speak a lot in the dressing room — but he spoke at the right time. He was an unbelievable leader for us. … Kimmo was around but he wasn’t around at the most crucial time, and that did hurt us a bit.”

The Flyers’ leadership group of captain Claude Giroux and alternate captains Simmonds and Mark Streit are strong performers more comfortable leading with their play rather than yelling in the locker room like Timonen or former Flyers captain Chris Pronger. Simmonds said other players would speak up in the room to varying effect.

“We all have to be accountable to each other,” he said. “If someone says something to you, you shouldn’t take offense to it. We’re all teammates and trying to be better. Kimmo didn’t always do the talking. But if it was something really important that had to be said, he was there to do it.

“We’ve got a lot of young guys that are growing into their roles and maturing as players on and off the ice. We’ve just got to get better at that.”

Having that singular voice could have helped stem some of the Flyers’ issues. They got off to a poor start for a second straight season, going 1-3-2 over their first six games and 8-12-3 through November; a penalty kill that ranked 27th in the NHL; and they ranked in the lower half of the League in 5-on-5 scoring.

“Everyone’s got to come to the rink more mentally prepared,” Simmonds said. “You’ve got to look in the mirror first. For myself I was a little inconsistent at times. You try to stop it as soon as possible. As a team we let it get too far away from us. … There were times we could have brought it back and we didn’t bring it back quick enough, and it was the snowball effect. To get better at it, we’ve got to be more mentally prepared.”

One veteran unable to provide that voice was forward Vincent Lecavalier, who was a healthy scratch 16 times. The 34-year-old had his poorest season, scoring eight goals in 57 games. He has three more seasons left on his contract but isn’t sure if he will be back with the Flyers next season.

“The way the season went, there obviously are questions,” Lecavalier said. “I don’t know. I like this team; I like the players. But my future, I don’t know. We’ll have to wait and see what happens around the draft, during the summer.”

Lecavalier said he signed with the Flyers in the summer of 2013 because he wanted to play for coach Peter Laviolette. Three games into the 2013-14 season, though, Laviolette was fired and replaced by coach Craig Berube. In two seasons, Lecavalier has seen his ice time diminish and his position change; when he played this season, he was at right wing on the fourth line.

“I still think I can bring a lot to the team, more than not playing and being on the bench,” he said. “I think to produce you need a little time on the ice and you need opportunities. I really think that didn’t happen this year at times.”

Figuring out Lecavalier’s situation is one of the many things general manager Hextall has to take care of during the offseason. He said he would take his time to evaluate Berube and his coaching staff, and there also are impending restricted free agent Michael Del Zotto and unrestricted free agents Ryan White and Chris VandeVelde to consider.

He also will have to clean up a logjam on defense. Brandon Manning’s signing to a one-way contract last week gives the Flyers seven defensemen on NHL contracts next season, and Del Zotto would make it eight. And the Flyers’ top four prospects — Shayne Gostisbehere, Samuel Morin, Robert Hagg andTravis Sanheim — are defensemen who could push for roster spots.

Though that sounds like a lot, a number of players believe the Flyers are closer to returning to the postseason than their record showed this season.

“I think we could have made the playoffs this year if we played a little more consistently during the year,” Giroux said. “Lot of things happen in an 82-game season, but I think we have a good group here.”