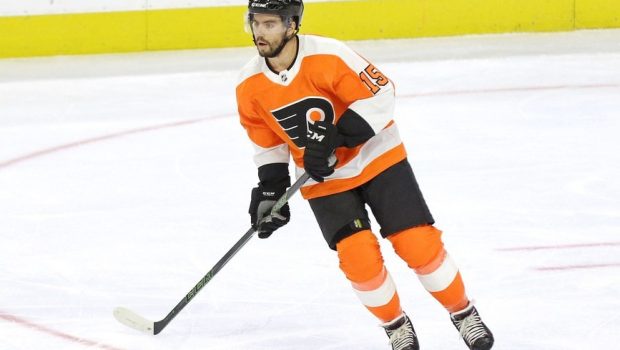 FLYERS MAY NOT PULL THE TRIGGER ON TODAY’S TRADE DEADLINE!

The NHL trade deadline is 3 pm today, so the Flyers need to make something happen in a hurry.

Up until now, their only trade has been to send American Hockey League goalie J.F. Berube to the Rangers for future considerations.

They’re hot, winning 8 of their last 11 games and have suddenly found themselves in the thick of the Eastern Conference playoff race. For general manager Chuck Fletcher, he may not want to play around with a roster that has suddenly found its groove at the right time.

Between the pipes, Carter Hart has put up pretty good numbers this season with .908 save percentage (SV%) and a 2.54 goals-against average (GAA). And although Brian Elliott’s numbers are not as good this season (.899 SV% and 2.90 GAA), he brings a lot of experience and is good to have as a No. 2 goalie.

The defense has some solid offensive pieces in Matt Niskanen (above), Ivan Provorov and Travis Sanheim, and will be getting a boost with the return of Shayne Gostisbehere. Furthermore, Niskanen and Justin Braun bring leadership and playoff experience that could prove especially useful during the Flyers’ playoff run.

Finally, the Flyers’ forwards have no trouble scoring goals and the unit boasts one of the best lines in the NHL with Jakub Voracek, Sean Couturier and Claude Giroux. Meanwhile, the top two goal-scorers on the team are not even on that line, as Travis Konecny (21 goals) and Kevin Hayes (19 goals) help comprise an impressive second line.

On this note, the Flyers have scored 201 goals, which is second in the Metropolitan Division to the 210 goals scored by the Washington Capitals.

The one area on the team which might need a boost for a potential playoff run is the fourth line, specifically at the center position. Throughout the season, the fourth-line center position has been occupied by several players, but recently, Connor Bunnaman has taken over the position.

Nonetheless, his numbers have not been spectacular so far. The fact that he only has one goal and two assists through 21 games is not the biggest concern, because he does play on the fourth line.

Rather, the stat that is most concerning is his lack of hits on the season. Bunnaman has registered 29 hits through 21 games, good for about 1.4 per game.

Bunnaman is only 21 and could be a solid player for the Flyers in the future. Nonetheless, for a team that is trying to make the playoffs now, adding a little experience and toughness at the position could not hurt.