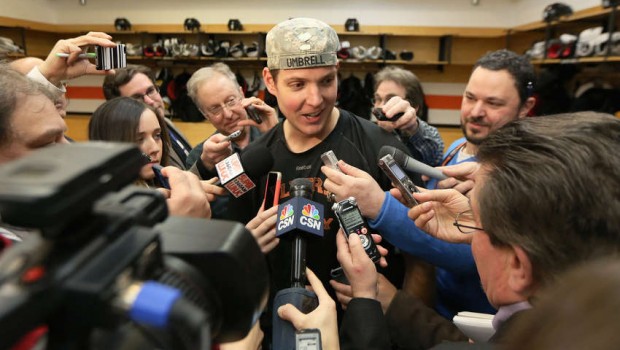 What a way for Flyers goalie Steve Mason to begin his first start since Feb. 8!

Flyers center Claude Giroux won the opening faceoff back to defenseman Nick Schultz, who passed right to Mark Streit, who cleared the zone with a pass off the boards that was intercepted by Rangers center Derek Stepan.

Stepan was looking to send the puck right back in the Flyers end, but his spinning clearing attempt from between center ice and the blue line came with the puck on edge.

That led to the puck hopping forward, taking a bounce, changing directions and past Mason just seven seconds into the game.

“Those are kind of tough plays,” Mason said. “The puck comes in bouncing and it’s going to my left, then it kicked back to my right. Embarrassing.”

Knowing Mason had to be down on himself, Giroux skated to his goal and cracked a joke in attempt to pick up his goalie’s spirits.

“I don’t even remember what he said, but we were both chuckling there,” Mason said. “He kind of lightened the mood for me, which was kind of nice of him because you’re kind of on an island when that happens with everybody kind of in shock.”

This terrible start that soon turned into nothing more than a big sigh of relief when the four officials gathered for a quick chat and then disallowed the Rangers’ goal due to a delayed off-sides call.

They got it right. Rangers left wing Chris Kreider had crept into the Flyers end to pressure the clear by Streit that bounced off the boards and to Stepan.

Just like that a goal that would have been the fastest ever allowed by the Flyers to start a game by two seconds was off the board.

And just like that Mason was on his way to a fantastic 34-save performance that included seven saves over 34 seconds during a frantic Rangers attempt to tie the game with under eight minutes to go in the third.

“I’m not taking credit for that,” Giroux said with a smile.

What the heck did Giroux say to Mason that was so funny?

“It’s hockey,” the Flyers captain said. “Stuff happens. I was just trying to make a joke out it. I told (Mason), ‘Don’t worry about it.’ When I found out it was no goal, I told him to have fun and if you’re not going to enjoy this game, you’re not going to play well.”

Mason returned to action just 16 days after the surgical procedure on his knee last Thursday night to play most of the final two periods in the Flyers’ 3-2 loss in Toronto. His knee felt OK stopping eight of nine shots in 32-plus minutes, but he still was thinking about it until the third period against the Rangers.

Making those seven saves in a row, a bunch of them good ones and a tremendous one that denied Rick Nash his 38th goal, were shots of confidence for Mason. That made him feel on his game again … and made him feel healthy.

“Those were just desperation saves,” Mason said. “I’m not sure I can remember all seven of them, but there was a big one on Nash where I kind of came across with my left skate there. That was good test for the knee there. Up until that point, the knee had kind of been in the back of my mind.”

“It was a big part of the game right there,” the coach said. “He stood tall.”

That was the Rangers’ last big chance to beat Mason and tie a game in which the Flyers took the lead for good on a shorthanded goal by defenseman Michael Del Zotto 1:19 into the third.

Sean Couturier’s pass to Del Zotto set up the goal that broke a 2-2 tie, and this was the play of the game, but Mason was the Flyers’ star of stars in a win over a scorching hot Rangers club that began the night 27-6-2 in their last 35.

“He was our best player out there,” Couturier said of Mason after the Flyers got back to six points of a playoff spot. “He kept us in the game. He made some big saves at the right time. He was a huge part of our win.”