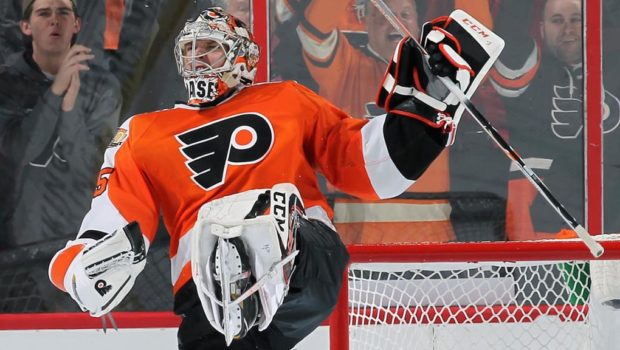 FLYERS’ MASON COMES UP BIG (45 SAVES) IN THE CLUTCH!

Flyers goaltender Steve Mason made 45 saves through overtime and stopped eight of nine attempts in the shootout to lift the Flyers (11-10-3) to a 3-2 win against the Boston Bruins (12-10-1) at the Wells last night.

“It’s nice to come out on top after a tough game and blowing a two-goal lead in the third period,” Mason said “We can’t be giving up leads like that in the third. It’s tough to gain momentum back after that. But we found a way tonight.”

Mason was the main reason they were able to find a way. He made saves on all 19 shots he faced in the first period, and the Bruins’ 47 shots were the most allowed by the Flyers since the Columbus Blue Jackets had 53 before defeating Philly 3-2 in a shootout on March 22.

“He made some pretty amazing saves,” Flyers captain Claude Giroux said. “Without Mason, we’re not in this game. He did a good job keeping us in this game.”

Giroux and Michael Del Zotto scored for the Flyers, who won consecutive games for the second time this season. They defeated the Calgary Flames 5-3 on Sunday.