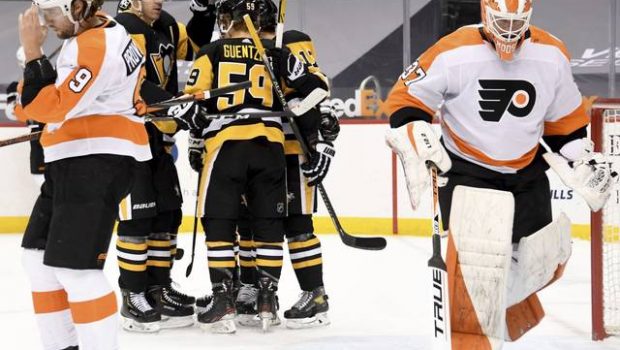 To says the Flyers are in a slump gives new meaning to the word slump.

In the first place, it is possible that their play in March is the actual level of mediocrity we should expect.

In any event, they host the Rangers tonight at the Wells, trying to avoid their fourth straight loss.

Despite a late flurry, the Flyers fell 4-3 to the New Jersey Devils on Tuesday.

During this skid — and for the last 13 games — turnovers, defensive miscues and shaky goaltending have plagued the Flyers.

They are 4-8-1 in March and have allowed an astonishing 57 goals.

“I don’t think we’re playing a full 60 minutes right now,” goaltender Carter Hart said. “We can’t just show up the last 10 minutes of the third and expect to win a game.”

And they are still two points behind the Boston Bruins for the fourth playoff spot in the East Division. But the Flyers have played three more games.

“We have a lot of confidence in our group,” captain Claude Giroux said. “I still think we’re going to make the playoffs. We need to be a little more consistent in our game, and it starts with me. You can’t play one good game and then one bad game and keep going like that.”

Sean Couturier scored two goals in the third period and nearly had a hat trick against the Devils. Another slow start put the Flyers in a 4-1 hole and they never fully recovered. This has been another troubling trend.