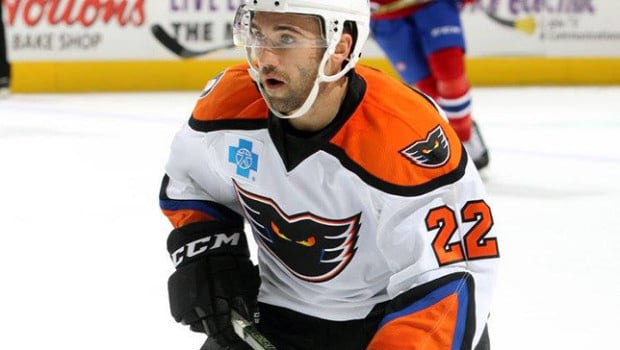 The Flyers recalled forward Chris Conner from their AHL affiliate, the Lehigh Valley Phantoms, on Sunday and that’s bad news for Vinny Lecavalier, who has been trying to get ice time.

Conner was scheduled to arrive in Vancouver on Sunday night and be ready to play in tonight’s game against the Canucks.

“He’s coming here for a reason, he’s available to play. Whether or not he’s in tomorrow, I’m not ready to speculate on that right now,” said coach Dave Hakstol. “I knew him as a young player and I followed his career, but he’s a guy that can bring pace; he’s a competitive guy especially on pucks and he can bring a little bit of offensive punch as well.”

This is Conner’s first recall of the season. He is currently tied for the Phantoms lead in goals (4) and ranks second on the team with eight points in eight games. He also leads the squad in plus-minus with a plus-6 rating.

The Flyers signed Conner to a two-year, two-way contract on July 1 at the start of free agency and appeared in one preseason game during training camp, going scoreless.

He spent last season with the Hershey Bears where he posted 19 goals and 33 assists for 52 points in 61 games. He has 180 career games of NHL experience over parts of nine seasons with the Dallas Stars, Pittsburgh Penguins, Detroit Red Wings, Phoenix Coyotes and Capitals where he has posted 22 goals and 28 assists for 50 points.

The Flyers are in the midst of their five-game, nine-day road trip and take on the Canucks in Vancouver on Monday night (10 p.m. ET, TCN & 93.3 WMMR).