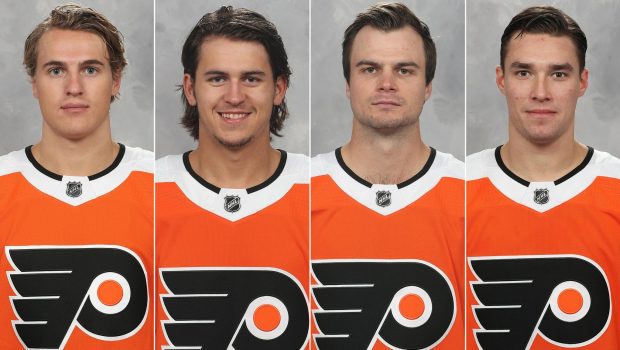 The Flyers are trying to clean up all their loose ends this summer:

They have issued qualifying offers to:

* In his third full season in the organization, he appeared in 54 games for the club’s AHL affiliate, the Lehigh Valley Phantoms, where he posted 30 points (16g-14a), including a team-best five game-winning goals.

* Konecny posted a new career high in assists (25) and points (49), while also tying his career-best in goals (24) this past season.

* In three seasons in the NHL, all with the Flyers, he has 124 points (59g-65a) in 233 games, while also increasing his overall point total for three straight seasons.

* Laughton set new career highs in goals (12), assists (20) and overall points (32) while appearing in all 82 games this past season… All 12 of his goals were scored at even strength, while 30 of his 32 points also came at even-strength.

* He recorded 26 points (7g-19a) in 82 games for the Flyers this past season and led the Flyers in time-on-ice, averaging over 25 minutes per-game, which is over five minutes more than any other Flyers defenseman averaged.

* In three seasons in the NHL, all with the Flyers, Provorov has 30 goals and 67 assists for 97 points in 246 games, while averaging 23:45 of ice time and has appeared in all 82 games each of his three seasons.