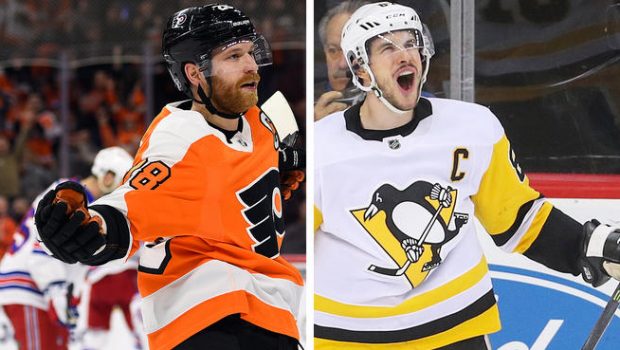 The Flyers look to tie the series after suffering a shut out loss to the Penguins in Game 1… In the playoffs, the Flyers have a record of 20-18 in Game 2 after dropping Game 1, including a 5-2 record in Game 2 after suffering a shutout loss in Game 1… During the regular season, the Flyers were shut out six times and rebounded to win the next game on four of those occasions, posting a 4-1-1 record.

The Penguins look to go up 2-0 in a series for the 21st time in their history, owning a 20-12 mark in Game 2 when winning Game 1… In the six previous playoff series against each other, the two clubs have split Games 1 & 2 just once (1989) with their last five series the team winning Game 1 has won Game 2… The Pens own a 41-25 all-time record in Game 2’s including a 29-12 on home ice… Dating back to last year, the Penguins own a seven-game home winning streak in the playoffs and in the last two years, own a 20-7 mark on home ice in the postseason.

Gostisbehere led all players on both teams in shots on goal in Game 1 with five, while logging over 20 minutes of ice time (20:32), nearly five minutes of which were on the power-play (4:58)… He has not gone two straight games without a point in over a month span (since Mar. 10) recording 15 points (3g-12a) since Mar. 12… Gostisbehere also averages a point per-game in the regular season against the Pens with 12 points (3g-9a) in 12 games.

As a rookie last year, Guentzel led all players in the playoffs with 13 goals, including five game-winning goals en route to the Stanley Cup, while his 21 points ranked fourth in the playoffs… He had a four-point night with a goal and three assists to go along with a +4 rating in Game 1, and during the regular season series, he had six points (2g-4a) and was a +5 in four games against the Flyers.