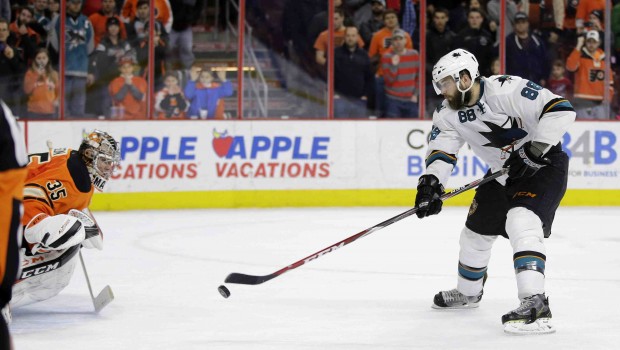 FLYERS LOSE AGAIN IN A SHOOTOUT, 3-2 TO SAN JOSE

How many times have Flyers fans seen this scenario.

Their faves battle all game and then lose in a shootout?

After yesterday’s 3-2 loss to the San Jose Sharks at the Wells, make their all-time record 30-61!

Which makes the point they got for losing in OT meaningless in their pursuit of the playoffs.

Brent Burns (photo above), one of four remaining defensemen, scored the game-deciding goal in the fifth round of the tiebreaker. He carried the puck down the middle of the ice, deked the puck from his forehand to his backhand and flipped it over the glove of Flyers goalie Steve Mason.

Melker Karlsson also scored in the shootout for the Sharks, who improved to 4-5 in the tiebreaker. Matt Irwin and Joe Pavelski scored in regulation for the Sharks, and goaltenderAlex Stalock made 16 saves. The 18 shots were the third fewest the Sharks have allowed in a game this season.

The Flyers also were playing shorthanded on defense. With Mark Streit and Carlo Colaiacovo missing the game because of the flu, defensemen Mark Alt and Oliver Lauridsen were recalled from Lehigh Valley of the American Hockey League.

With the Flyers playing two rookie defensemen and another, Brandon Manning, who spent most of the season in the AHL, Michael Del Zotto played a career-high 30:18.

“I thought we battled and guys did a good job that were just called up,” Flyers coach Craig Berube said. “It’s not easy for them. [We] gave ourselves a chance to win.”

Michael Raffl and Claude Giroux scored for the Flyers (30-29-17), and goaltender Steve Mason made 41 saves.

Jakub Voracek had two assists and scored Philadelphia’s only goal in the shootout. The Flyers dropped to 3-10 in the tiebreaker this season.

Voracek has 76 points, two behind League-leader Sidney Crosby of the Penguins.

The point Philly received for reaching overtime, combined with the Boston Bruins’ defeat of the New York Rangers, leaves the Flyers 10 points out of the second wild card into the Stanley Cup Playoffs from the Eastern Conference with six games remaining.

The Flyers trailed 2-1 after two periods but Giroux’s power-play goal at 8:37 of the third tied the game.

The Sharks had chances to win the game later in the third and in overtime, including a power play when the Flyers’Brayden Schenn was called for boarding for a hit on Irwin.

Despite outshooting the Flyers 44-18 and out-attempting them 83-47, the Sharks said they never got frustrated.

“You can’t [get frustrated], really,” Burns said. “You just have to keep playing.”

Pavelski gave the Sharks a 2-1 lead at 16:43 of the first period on a goal that he banked off Manning’s skate and under Mason. Referees had blown the play dead but video review determined that the puck crossed the goal line as the culmination of a continuous play that was unaffected by the whistle, and the goal was allowed to stand.

“Once it goes to (the NHL Situation Room) in Toronto, we’re done,” McLellan said. “We just stand there and wait for the call and we have to respect what the decision is.”

The Sharks and Flyers each scored a goal early in the first period.

Irwin opened the scoring at 4:38 when he intercepted a clearing attempt by Voracek and scored on a shot from above the right circle. Then at 6:44 the Flyers responded with Raffl’s 20th goal. A shot from the point by Nicklas Grossmann hit off two Sharks and bounced to Stalock, who knocked it off the post and to Raffl, who was in front to knock it in.