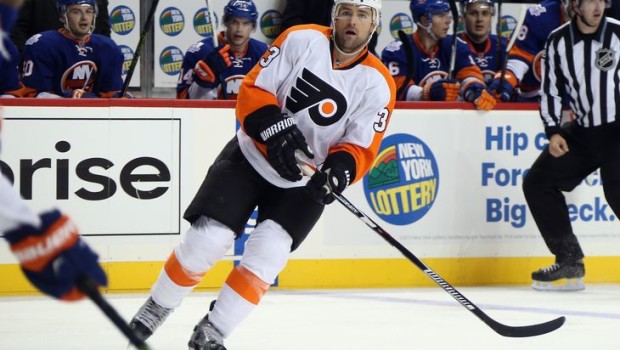 FLYERS LOSE PORTER TO WILD — WHAT WAS HEXTALL THINKING?

So, we guess that Flyers general manager Ron Hextall is feeling a bit like a deer in the headlights this morning.

He placed left wing Chris Porter on waivers on Wednesday, and Porter even scored a goal in the Flyers loss to the Devils that night.

Then, on Thursday the Minnesota Wild claimed left wing Chris Porter off waivers.

The move was made before the Wild’s final exhibition game against Buffalo. Porter signed a one-year, two-way contract with the Flyers but was one of their final training camp cuts. The native of Toronto has played in 173 NHL games, all with St. Louis over parts of the past six seasons. Porter played in three playoff games for the Blues last spring in the Western Conference quarterfinals against the Wild.

The 31-year-old Porter was a teammate of Wild star Zach Parise at Shattuck-St. Mary’s prep school in Faribault, Minnesota, and in college with North Dakota. Porter and Parise attended each other’s weddings.

Porter, 31, was signed this offseason by the Flyers to a two-way deal. The former University of North Dakota forward had played for new Flyers coach Dave Hakstol and nearly earned a job.