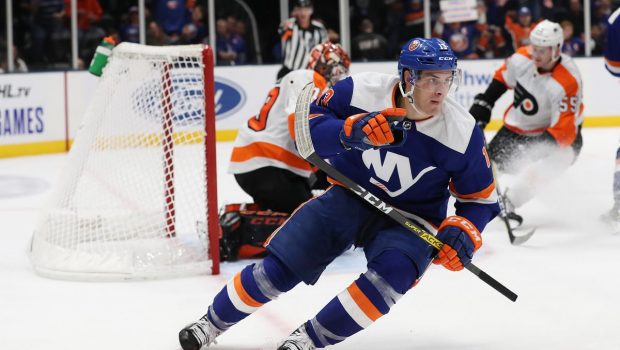 FLYERS LOSE IT ON THE ISLAND, ENDING 3-GAME WIN STREAK!

Mathew Barzal had a goal and an assist and the Islanders beat the Flyers 5-3 to end Philly’s three-game winning streak.

Jakub Voracek, Travis Konecny, Claude Giroux scored for the Flyers. Carter Hart made nine saves on 14 shots before being replaced by Brian Elliott midway through the second period.

Voracek scored 1:07 into the game, and the Islanders countered with three straight goals.

Konecny cut the Flyers deficit to one, redirecting Justin Braun’s shot from the point past Varlamov at 16:38 of the first. Konecny has recorded at least one point in nine of the Flyers’ 10 games this season after signing a six-year, $33 million contract in mid-September.

The Islanders answered with two goals in the second period. Pulock hammered a slap shot past Hart at 4:13 of the middle frame to extend New York’s lead to 4-2. Cal Clutterbuck and Adam Pelech assisted on the play.

Barzal helped the Islanders seize control when he overwhelmed defenseman Samuel Morin with his speed. Lee chipped the puck out of the defensive zone, Barzal sped past Morin before sending a wrist shot between Hart’s pads 1:25 after Pulock’s goal, giving the Islanders a 5-2 advantage.

Elliott made 19 saves in relief of Hart after entering the game at the 8:46 mark of the second.

At 17:04 of the third period, James van Riemsdyk found Giroux alone in the slot and the Flyers’ captain scored his second of the season.

“We obviously didn’t execute as well as we had the past few games and we paid for it,” Flyers coach Alain Vigneault said. “Their forecheck was obviously good because they forced our D into quite a few turnovers tonight and those turnovers were costly.”