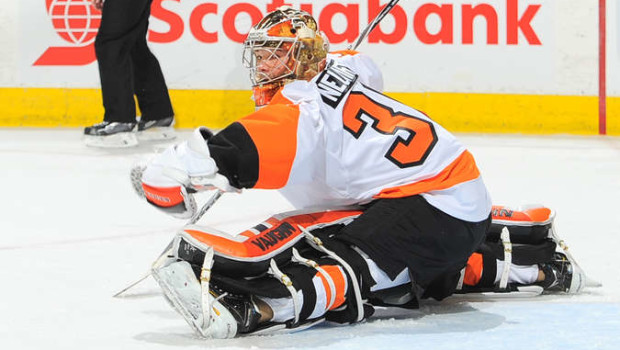 The Flyers were dealt a blow today that may affect their push for the playoffs.

Goaltender Michal Neuvirth is expected to be sidelined a week to 10 days with a lower-body injury. So the Flyers (21-18-8), who will once again turn to Steve Mason in tonight’s game against the Montreal Canadiens (24-22-4).

Mason has dropped his last three starts to fall to 10-12-6 with three shutouts and a 2.76 goals-against average this season. The 27-year-old Ontario native has enjoyed success versus Montreal, against which he has stopped 73 of 78 shots to win all three career encounters.

Neuvirth has posted an 11-6-2 mark with three shutouts and a 2.14 goals-against average this season. The 27-year-old’s .933 save percentage is tops in the NHL.

Also on Tuesday, the Flyers recalled goaltender Anthony Stolarz from Lehigh Valley of the American Hockey League. Stolarz posted a 15-10-3 mark with a 2.45 goals-against average in 29 appearances with the Phantoms this season.