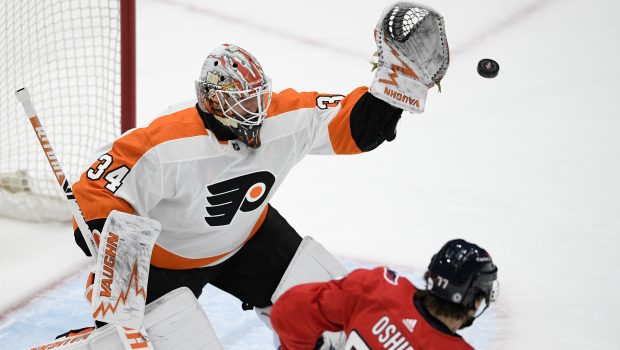 The Flyers were bystanders as the Caps rallied for an OT win last night in DC.

Lars Eller tied it with 39.8 seconds left in regulation, Conor Sheary scored the overtime winner and the short-handed Capitals beat the Flyers 2-1.

Failing to win in regulation gave the East Division title to the rival Pittsburgh Penguins. The Capitals locked up the No. 2 seed in the East and home-ice advantage in the first round but lost star winger T.J. Oshie to injury and got quite the scare with Tom Wilson going down in pain.

“I don’t know how we pulled it off, to be honest,” said Eller, who played a career-high 27:06. “I can’t remember ever missing so many guys and guys dropping during the game. Really a lot of guys showed a lot of character today and stepped up in different ways.”

The Capitals went into the game without captain and leading goal scorer Alex Ovechkin, top two centers Nicklas Backstrom and Evgeny Kuznetsov, No. 1 defenseman John Carlson and goalie Ilya Samsonov. Ovechkin, Backstrom and Carlson are each considered day to day with a lower-body injury, while Kuznetsov and Samsonov were unavailable because of NHL COVID-19 protocol.

Playing that short-handed did no favors for 39-year-old Craig Anderson, who was making his first start since Feb. 23. Anderson finished with 26 saves, allowing only Scott Laughton’s goal 3:42 into the third.

“Just super frustrating,” Lyon said. “As good as you play, you still give up a goal in the last 40 seconds and then you give one up in overtime and you lose the game.”