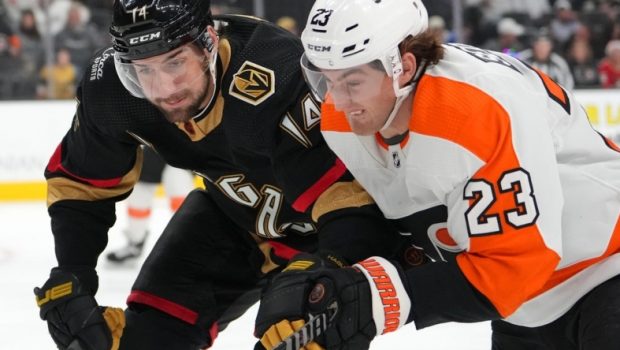 FLYERS LOSE IN OT, ADD A POINT IN VEGAS

Jonathan Marchessault scored 3:21 into overtime and the Vegas Golden Knights defeated the Flyers 2-1.

After the Flyers controlled much of the action in their offensive zone for the first three minutes of the extra period, Marchessault stole the puck from Kevin Hayes, raced in on a breakaway and beat goalie Carter Hart to give Vegas its first home win against Philadelphia since Jan. 2, 2020.

“We didn’t have the puck a lot in the overtime, and I was just lucky there to get away from Hayes,” said Marchessault, who has scored a goal in four consecutive games. “We had to find a way to win a hockey game tonight. I think that’s what we did.”

Adin Hill made 27 saves, including Philadelphia’s lone shot on goal in overtime. William Carrier scored in the first period for Vegas.

Scott Laughton scored early in the second for the Flyers, and Hart finished with 32 saves.

“Obviously a disappointing finish, but it’s a hard-fought point,” said Hart, who is 7-1-5 when facing 30-plus shots. “That’s a really good hockey club, so we stuck with them for the whole game.”