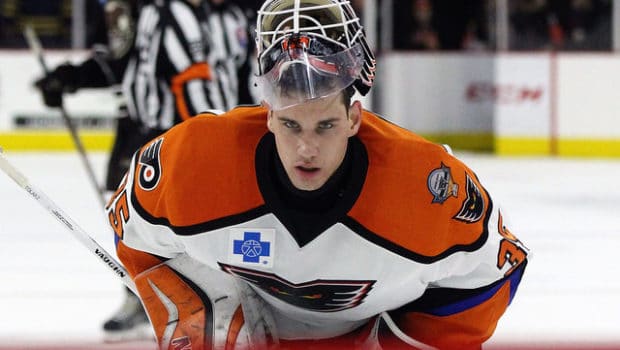 The Flyers are going to have do without goalie prospect Anthony Stolarz, who is out indefinitely after undergoing surgery on his left knee.

Even if healthy, Stolarz would be positioned behind Brian Elliott and Michal Neuvirth.

Stolarz put up solid numbers in the AHL, but the towering goalie’s limited NHL work was quite impressive; he went 2-1-1 while managing a splendid .928 save percentage in seven appearances with the Flyers in 2016-17. Such work inspired some (PHT included) to wonder if he might be worth a longer look with the big club.

The 45th pick of the 2012 NHL Draft. Stolarz signed a one-year, two-way contract with the Flyers back in July.

This setback opens up a chance for Leland Irving, a goalie who hasn’t lived up to being the 26th pick of the 2006 draft.