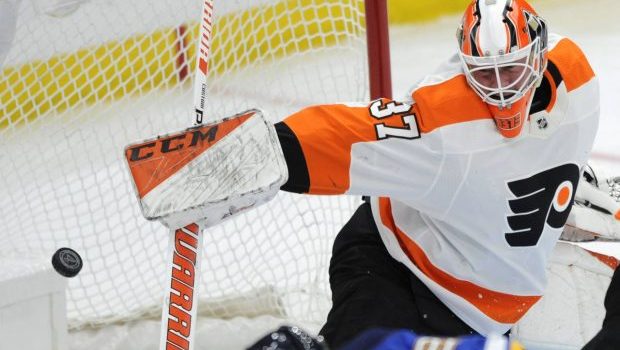 The Blues scored five times in the first period against the Flyers and the teams combined for seven goals on the first 14 shots.

And those five Blues goals came in the first 9:41 of the first period, the fastest the Blues have scored five times in franchise history.

“Eight goals. No, it felt like it took forever, that’s for sure,” Alex Pietrangelo said. “It’s good. You don’t want to give up three goals but sometimes you get up quickly like that you get loose, but we cleaned it up after that.”

By night’s end the Blues had a 7-3 victory, improving to 44-28-9 on the season and 97 points. Nashville rallied to beat Vancouver 3-2, to take over first place in the Central Division with 98 points.

Winnipeg lost in overtime to Colorado, so the Jets now have 97 points but hold the tiebreaker edge over St. Louis. So that leaves the Blues in third place with Saturday’s season finales for all three teams.

They also get in with an overtime loss, coupled with regulation losses by Winnipeg and Nashville.

“It would be huge, a proud thing for us to win the division,” O’Reilly said. “We’ll be scoreboard watching a bit. We want to win the game, We want to go to the playoffs doing the right things, playing the right way and see where we fall.”

But the Blues did accomplish something. Thursday’s win assured them of no worse than a third-place finish in the Central. Dallas can no longer catch them.

Brayden Schenn scored his 16th goal of the season with 6 minutes 54 seconds left in the second, picking up some loose change in front of the net to beat Flyers goalie Carter Hart. Hart replaced Brian Elliott four goals into the Blues’ five-goal barrage in the first period.

Through two periods, 10 of the Blues’ 12 forwards had at least a goal or an assist. Or some combination of both.

The St. Louis defense, which played loose and at times sloppy in the first period, calmed down in the second limiting Philadelphia to six shots.

Getting goals from, in order, Ivan Barbashev, Ryan O’Reilly, Alexander Steen, Pat Maroon, and David Perron, the Blues raced to a 5-3 lead after one period. The Blues’ five-goal outburst fell just one short of the team record for most goals scored in one period.

O’Reilly’s goal was his 28th, tying his personal season high. Maroon’s score was his 10th, giving the Blues 12 players with at least 10 goals for only the fourth time in franchise history. The O’Reilly and Perron goals came on the power play; Steen’s goal was shorthanded score, and came on a great setup by Oskar Sundqvist.

Former Blue Brian Elliott started in goal for the Flyers, but was pulled after allowing four goals.