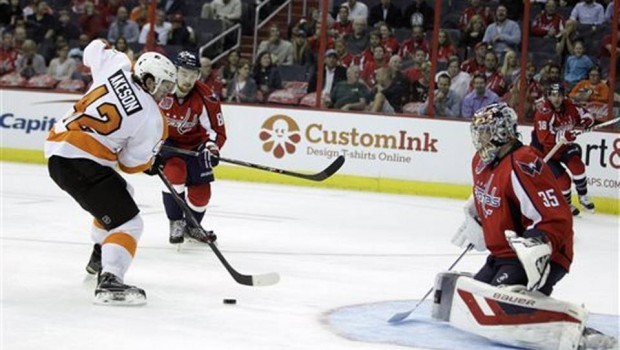 Nicklas Backstrom and Evgeny Kuznetsov scored in the shootout to give the Washington Capitals a come-from-behind 3-2 victory against the Flyers in a preseason game at Verizon Center on Thursday.

Washington’s Eric Fehr tied the game 2-2 when he scored with 1:01 left in regulation.

The Flyers led 1-0 on a first-period goal by defenseman Mark Streit.

Capitals rookie Andre Burakovsky tied it at 9:25 of the second period, but Akeson put the Flyers back in front 33 seconds later (photo above).

It was the final preseason game for the Flyers, who open the season on the road against the Boston Bruins on Oct. 8.