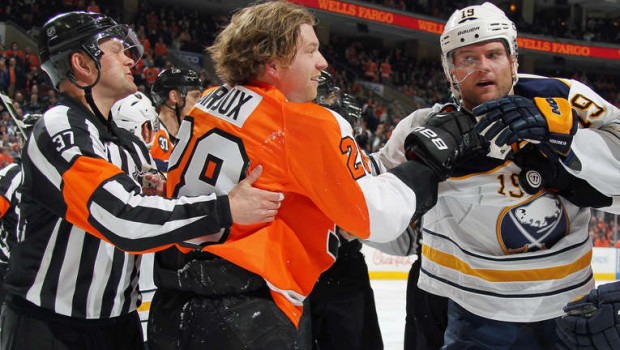 FLYERS LOSE TO BUFFALO!!!!! PLAYOFFS LOOK LIKE A BRIDGE TOO FAR

Captain Claude Giroux was mad as hell and wasn’t going to take it anymore!

The Flyers have an agonizing knack of streaking within sight of a playoff spot and then losing a game they should have won that brings them and Flyers Nation back to earth.

The Sabres had played five straight one-goal games before facing the Flyers on Thursday. Having lost four of them, captain Brian Gionta said he believed it was just a matter of time before the puck started bouncing the Sabres’ way.

Buffalo got all the bounces it needed, including one courtesy of Gionta, in a 3-2 shootout win at the Wells.

Brian Flynn scored in the fourth round of the shootout to clinch the victory. The Sabres (17-37-4) improved to 7-2 in shootouts this season.

Philly had moved to within six points of the idle Boston Bruins in the race for the final Eastern Conference wild-card berth into the Stanley Cup Playoffs. But a home loss to Buffalo, which is last in the NHL standings, felt like a missed opportunity. It was the Flyers’ second straight loss to a team below them in the standings; they lost 5-2 to the Columbus Blue Jackets on Tuesday.

“It’s rough,” Flyers defenseman Mark Streit said. “It’s annoying. We seem to have a hard time against teams a little bit behind in the standings. You know those points are crucial, and we couldn’t find a way today to get it done.”

The Flyers had their chances, with 38 shots on goal. They went 1-for-4 on the power play, including a missed chance on a man-advantage midway through the third period when the Sabres’ Chris Stewart was sent off for hooking.

“We’re definitely not happy about it,” Flyers coach Craig Berube said. “In saying that, tonight we’ve got to find a way to score another goal. We didn’t.”

With a tough back-to-back set coming Saturday and Sunday against the Nashville Predators and Washington Capitals, the Flyers remain positive that a postseason spot remains within their grasp.

“We’re playing good hockey,” Philly captain Claude Giroux said. “We’re playing as a team. Every game is tight at the end of the year, and we know that. We just need to play 60 minutes of it. … We had good chemistry out there, we had a lot of good chances. But it’s obviously disappointing.”

The Sabres opened the scoring on a goal by Deslauriers that he mostly fanned on but got enough to send it knuckling past Emery at 4:41 of the first period for his first goal in 21 games. It was Deslauriers’ fifth goal.

The Flyers tied the game less than three minutes later on White’s first goal since Feb. 8, 2014, when he played for the Montreal Canadiens, but the Sabres took back the lead 38 seconds into the second period on Gionta’s sixth goal.

Torrey Mitchell put a bouncing shot on net that Emery stopped but couldn’t control. Gionta got to the front of the net and batted the puck out of the air and past Emery.

“One of those bounces that you’ll take,” Gionta said. “You’ve got to work for your bounces. It’s finally nice to get one. … Just throwing pucks at the net is a big key. And you’ve got to have guys going [to the net]. Mitchell throwing the puck at the net is the first key. We haven’t had that all year consistently, but when we do it we get those bounces.”

The Flyers tied the game 2-2 on Voracek’s sharp-angled power-play goal off the rebound of a Wayne Simmonds shot at 8:45 of the second period. It was Voracek’s 19th goal of the season but his first against a goalie in 15 games, dating to Jan. 12 against the Tampa Bay Lightning. Voracek had an empty-net goal against the Washington Capitals on Feb. 8.

With the assist, Simmonds has at least a point in six straight games, tying his career-best streak; he has four goals and four assists in that span. He also had a six-game point streak from Nov. 25-Dec. 5, 2009, with the Los Angeles Kings.