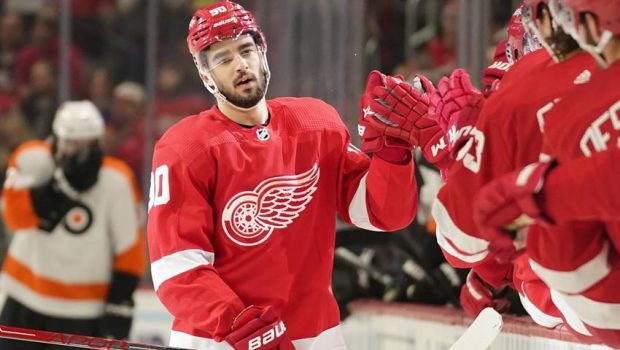 The Red Wings were coming off a four-game trip in which they went 1-3.

The Flyers are tied for last place in the Metro with the Devils — each team has 51 points, 39 behind first-place Carolina.

Detroit led 2-0 after the first period.

Veleno scored his seventh goal when he circled the Flyers’ net and fired the puck inside Hart’s left shoulder.

Vrana’s ripped a shot through traffic from the left circle for his first goal of the game.

Raymond made it 3-0 at 1:07 of the second period with a blast from the left side. The Flyers got on the board 25 seconds later when Farabee scored in front off a feed from Kevin Hayes.

Lindblom beat Nedeljkovic on the glove side for his 11th goal to cut the Red Wings’ advantage to 3-2.

Vrana’s second goal, and fifth of the season, was a one-timer off a pass from Larkin with 1:07 left in the period.

“Any time you give up a goal in the last minute of a period, that’s tough. But I thought we regrouped and came out hard in the third period,” Flyers interim coach Mike Yeo said. “Obviously, there’s some things we can be better at execution-wise. We had some turnovers tonight and we’ve got to be a little bit sharper there. I did like the way the guys kept battling back for each other here tonight, just didn’t find a way to tie it up.”

Empty-netters by Sundqvist and Bertuzzi sealed the victory.

“Overall, I thought we played a pretty solid game, minus a few turnovers that ended up in the back of our net,” Farabee said. “If we just clean that up, we can play more of a complete game and give ourselves a better chance.”