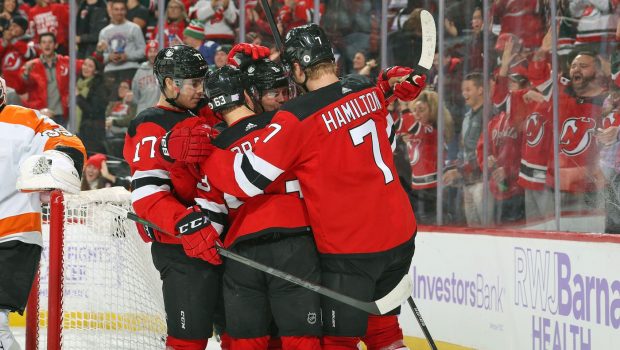 The Flyers lost their sixth straight game last night, 5-2 in Newark to the Devils.

And they are mired in next-to-last place in the Metro with 20 points.

And, for all the world, they look like the same fumbling, stumbling team that excruciatingly teased us last season before reverting to mediocrity.

But the hope of the summer, when they shook up their roster, has started to look like hype! Even the picks at www.oddsshark.com/nhl/computer-picks told the same story with slim odds.

Dougie Hamilton had a goal, an assist and 10 shots on goal, and Nathan Bastianalso scored for New Jersey. Mackenzie Blackwood made 22 saves for New Jersey, which snapped a two-game losing streak and won at home for the first time since Nov. 11.

For the Flyers, Joel Farabee scored in his third straight game and Scott Laughton had a goal and an assist. Martin Jones made 30 saves, and Philadelphia dropped its sixth game in a row.

Bratt broke a 2-all tie with eight minutes left in the third period. Johnsson stole the puck in the Flyers zone and fed Bratt, who beat Martin Jones on a backhand shot. Bratt extended his point streak to four games and now has 14 points (three goals, 10 assists) in 12 games in November.

″(Bratt) did a great job screaming at me to let me know he was there,” Johnsson said. “I just had to put it on his stick and knew he was going to score once he got it.”

Bastian sealed the win with his second goal of the season — and first for the Devils. The 2016 Devils draft pick was chosen by the Seattle Kraken in the 2021 expansion draft, but claimed by New Jersey off waivers Thursday.

“I think inside the room, that room feels good about what every line did,” New Jersey coach Lindy Ruff said. “I like to see (fourth-line) guys get rewarded.”

Hamilton broke the ice for New Jersey at 5:07 of the first. It was his sixth goal of the season, which leads all Devils defensemen and is tied with Florida’s Aaron Ekblad for third-most among NHL blueliners.

“He reads the game so well,” Johnsson said of Hamilton. “He’s very hard to play against and puts the pucks up to the forwards right away, joins the offense when it’s time to do that, plays great defense. He’s just a general out there.”

Laughton knotted the score with three minutes to go in the first with his first short-handed goal of the season. After the Flyers won a puck battle at the Devils blue line, Provorov hit Laughton with a breakout pass, and he outmuscled Devils defenseman P.K. Subban then flipped a backhand shot past Blackwood.

Johnsson snapped a 1-all tie with his eighth goal of the season at 1:47 of the second. Then, the Flyers tied the game at 3:04 in the third when Laughton took an errant pass behind the Devils net, then fed Farabee for his seventh goal of the season, pulling him into a tie with Cam Atkinson and Claude Giroux for the team lead.

“He’s been good for us,” Laughton said of Farabee. “He always makes good plays with the puck. He plays hard. … It’s good to have guys like that in the lineup.”