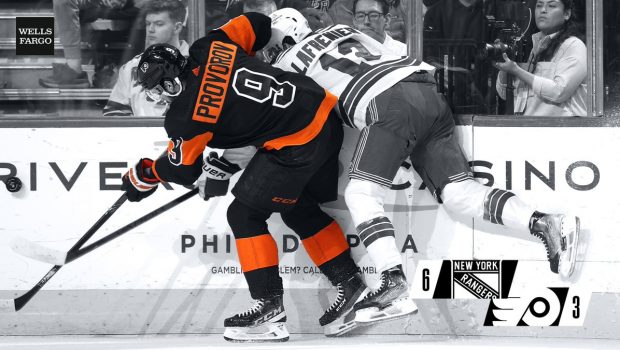 Jimmy Vesey scored early in the third period and the New York Rangers beat the Flyers 6-3 for their sixth straight win.

James van Riemsdyk, Scott Laughton and Morgan Frost scored for the struggling Flyers, who have lost 17 of their last 20 (3-12-5). Carter Hart finished with 29 saves.

Flyers coach John Tortorella was satisfied with the effort, similar to the one his team gave in a 1-0 overtime loss at Madison Square Garden on Nov. 1.

“I thought we had good energy tonight,’’ Tortorella said. “I thought we started off well. It was a game that could have gone either way. … I think our guys work hard. We make mistakes. But the effort level and the energy, I really don’t worry about that.’’

Vesey, who had two goals in the Rangers’ 3-1 win at home against Toronto on Thursday night, scored at 6:22 of the third period to give New York a 4-2 lead. It was his sixth of the season and fourth in the last nine games.

Frost scored just 31 seconds later with his fifth to pull the Flyers back within one.