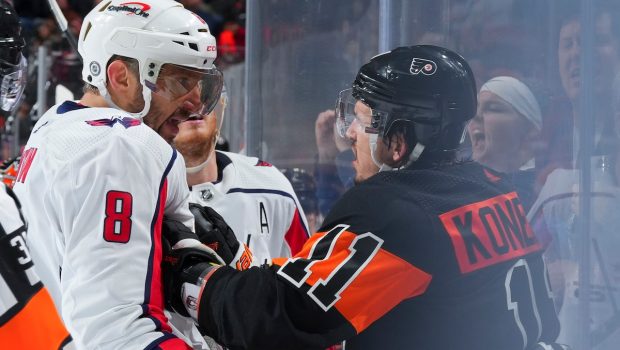 Ovechkin netted his 50th and 51st career empty-net goals and is five away from Gretzky, who has the all-time lead in that category.

Kevin Hayes scored for Philly, which has lost 13 of 15 games. Carter Hart made 23 stops.

“We just struggle generating offense,” Philadelphia coach John Tortorella said. “It’s a problem here. Some is confidence, some is we just struggle offensively.”

Hayes scored his ninth goal of the season for his team-leading 28th point with 4:14 left in the first period to give the Flyers a 1-0 lead. Hayes rushed to the bench after breaking his stick on a slap shot attempt, and scored on a wrist shot from the high slot with his new stick.

The Flyers had a power-play goal for the third straight game and have four overall in that stretch. Philadelphia, which began play ranked 30th in the NHL in scoring on the man advantage, now has converted 16.7% (14 of 84) of its chances.

Pretty pathetic of Konecny, if you ask me. Flyers continue to be an embarrassment on the ice. https://t.co/TTYJ4fHamR