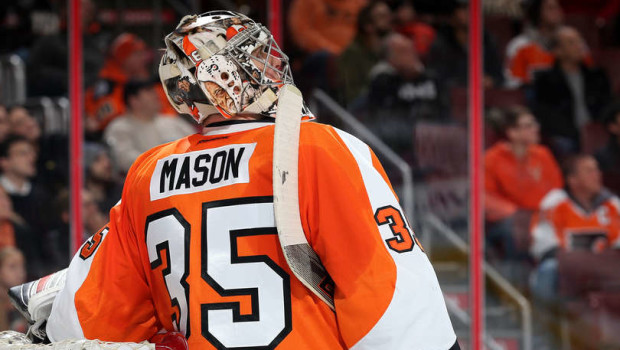 FLYERS LET ONE GET AWAY, LOSE TO LEAFS 3-2 — PENS NEXT

The Flyers let one get away last night.

Matt Hunwick’s goal with 7.5 seconds left in the third period helped the Toronto Maple Leafs end a five-game losing streak with a 3-2 win against the Flyers at the Wells.

Joffrey Lupul and Roman Polak scored for the Maple Leafs (17-20-7), and goaltender James Reimer made 31 saves.

Hunwick scored the winner when his slap shot from the right point went through traffic, deflected off Flyers defenseman Michael Del Zotto’s right knee, and got past goalie Steve Mason (above) for his first of the season. It came off a faceoff win by center Tyler Bozak after Flyers defenseman Radko Gudas iced the puck.

The goal was Hunwick’s first in 43 games with the Maple Leafs, who signed him as a free agent July 1.

“Just happy to contribute,” Hunwick said. “Most nights, it’s in the defensive zone or on breakouts, kind of under the radar. Always nice to chip in a goal and help the team win.”

Matt Read and Shayne Gostisbehere scored for Flyers (20-16-8), and Mason made 32 saves.

It was the Flyers’ first regulation loss in seven games (5-1-1). It also was their first home regulation loss since Dec. 5 against the Columbus Blue Jackets, a span of nine games (6-1-2).

Polak’s first goal in more than a year tied the game 1-1 at 13:19 of the first. Brad Boyes, cutting through the middle of the slot, tipped a Peter Holland centering pass that Mason stopped but fumbled. Polak, following the play, banged the rebound under Mason for his first goal since Jan. 15, 2015.

“[Polak] has been a workhorse for us the whole year,” Maple Leafs captain Dion Phaneuf said. “He’s been consistent, really hard to play against. Sometimes he doesn’t get the credit he deserves. For him to get rewarded offensively, makes a great read to jump in to the play. I think it’s great for [Polak].”

Lupul put the Maple Leafs ahead 2-1 at 15:10 of the second period. Phaneuf got the puck alone in the low slot and took a quick shot that Mason stopped. He kicked the rebound into the slot, where Lupul scored his 10th of the season but first in 12 games dating to Dec. 21.

“I’ve been struggling,” Lupul said. “Think I haven’t had one since Christmas; that’s a long break. That’s the way it goes. Good play by [Nazem Kadri] to Dion, puck kind of pops to you. You hang around those areas enough that you start to get some. Hopefully, I can get on a little roll now.”

With their second-leading goal-scorer James van Riemsdyk out 6-8 weeks because of a broken left foot, the Maple Leafs need someone to pick up the offense.

“Anybody who perceives themselves as a scorer and they’re not scoring, their confidence goes away,” Toronto coach Mike Babcock said. “Maybe now [Lupul] can get relaxed and get playing the way he’s capable of playing. Thought he was physical tonight.”

The Flyers appeared to be on their way to rallying in the third period to get at least a point for the fourth straight game after Gostisbehere’s spectacular individual effort to tie it 2-2 at 12:59 of the third period.

He intercepted a pass by the Maple Leafs’ Morgan Rielly at the top of the circles in the Flyers zone and skated the puck alone into the Toronto end. He paused at the blue line to create a 3-on-1 rush, then carried it to the bottom of the left circle and put a wrist shot between Reimer’s pads for his eighth goal, which leads NHL rookie defensemen.

The Flyers are 1-6-2 in nine games against the bottom-seven teams in the League standings: the Anaheim Ducks,Winnipeg Jets, Calgary Flames, Edmonton Oilers, Buffalo Sabres, Maple Leafs and Columbus Blue Jackets.

“It wasn’t a good game,” Mason said. “It would’ve been great to get into overtime. But at the end of the game there, we got what we deserved for the effort that we had tonight.”

The Flyers carried play early, at one point outshooting the Maple Leafs 11-1 and took a 1-0 lead on Read’s power-play goal at 11:06 of the first period. But momentum shifted not long after that, led by Polak’s goal.

With its losing streak over thanks to some timely goals, Babcock said the next step for Toronto is starting to build some consistency heading into home games Thursday against the Carolina Hurricanes and Saturday against the Montreal Canadiens.

“You go back and you start counting back and you go through the games, say we could have won that one, got points in that one,” he said. “That starts to get old. You need to win to feel good about yourself. We’ll have much more energy [Wednesday for practice] than we would have [if they lost].”