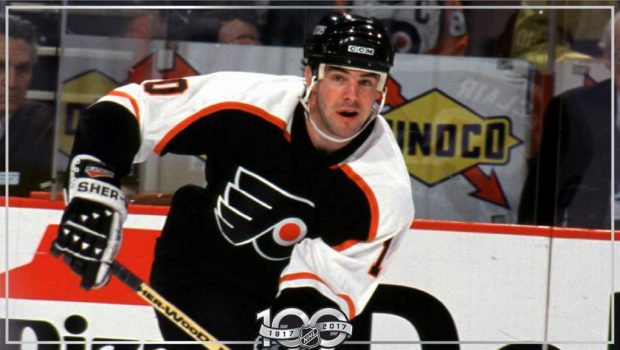 The Flyers haven’t won a Stanley Cup since 1975, when Madonna was 16, which makes them dead last in Philly supremacy:

Sure, the Flyers have made lots of Cup finals, but the last was 2010, when they lucked in and lost to the Black Hawks.

So the last true shot they had was 1997, when they lost to Detroit. And John LeClair, who had arguably his best years as a member of the “Legion of Doom” line on the Flyers, remembers it well.

And Andrew Berkshire, who interviewed him for Betway Insider, got some great stuff out of LeClair:

AB: You won the cup with Montreal, but hearing you talk about that Flyers era, does it feel like there was unfinished business because you guys didn’t win? Was there a missing piece or to win does everything just need to break right?

JL: It does! We had some great teams in Philly, top-of-the-league teams. We just never got over that hurdle, and it is disappointing. There were different things in different years that didn’t go right, but that’s why we play the games. In 2004, maybe if we weren’t playing forwards on defense we get by Tampa Bay and beat Calgary, but you can’t spend your whole life on what ifs. As a whole, I know we had Stanley Cup teams in Philly.

JL: For me it wasn’t a good time. When your body’s getting up there in age, you want to keep it going and get as much as you can out of it. I actually had back surgery during the lockout, so it did help with maintenance, but I don’t think it did anything for anybody. I think the sport took a big hit because of it, and took a long time to recover. For me personally, I ended up having to go to Pittsburgh, and I felt alright, but I think I could have been better without the year off.

Unfortunately, I had to play against Gretzky and Lemieux! Patrick Roy is net. I know Marty Brodeur was good too, but I have a ring because of Patrick. On D, Bourque and Coffey come to mind right away. Gretzky and Mario need a left wing so maybe… No, I can’t put myself, there’s so many greats. I think I’ll put Messier there.

All-time lineup made up only of players you never played with?

I can’t stop watching Connor McDavid. He’s a monster. Gordie Howe for everything he accomplished, he’s got to be there. Coming up through Montreal and learning the history there, nobody put the puck in the net like The Rocket, so Maurice Richard. On defense, legendary defenseman Toe Blake is in, and we’ll round out the defense with Bobby Orr. In goal, I grew up watching Ken Dryden, he just felt so far ahead of everyone else at the time.

Favorite coach you ever played for?

Roger Nielson comes to mind right away, there’s not a nicer man in hockey. Terry Murray when I first came to Philly, he played the heck out of me. And winning a cup with Jacques Demers, Jacques is a really nice man. One of those guys who is really just nice to be around. He’s just comforting.