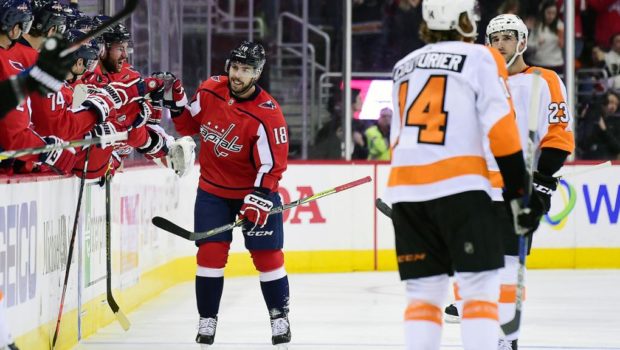 The Washington Capitals scored five straight goals to rally for a 5-3 win over the Flyers.

Andre Burakovsky, T.J. Oshie and Devante Smith-Pelly scored, and Lars Eller and John Carlson each had two assists for the Capitals (30-15-5), who have won two games in a row and lead the Pittsburgh Penguins by six points for first place in the Metropolitan Division.

“It’s a four-point game (in the standings),” Eller said. “Everybody’s fighting for [Stanley Cup] Playoff spots. We’ve got a bit of a gap now, but they could creep up fast, and you don’t want that. I think it was bigger than it might look or might feel right now because it’s going to be tight.”

Nolan Patrick, Travis Konecny and Jakub Voracek scored for the Flyers (24-18-8), who have lost two in a row and trail the Capitals by nine points in the Metropolitan. Konecny has a goal in five straight games.

Braden Holtby made 27 saves for Washington, which trailed 2-0 after the first period. Michal Neuvirth allowed five goals on 20 shots before being replaced at 9:06 of the third by Alex Lyon, who made five saves in his NHL debut.

“We were up 2-0 in a tough building, so we just have to make sure to find a way to keep the game close,” Voracek said. “We did. We were down 3-2, which is not a bad spot here in Washington, but it got away with those two quick goals.”

“It’s a little bit of a relief. It’s kind of the monkey off your back,” Stephenson said. “But you try not to think about it too much that, ‘I’ve got to score this game,’ or anything like that. Just try to help the team out as much as you can.”

Burakovsky ended a nine-game goal drought when he deflected a pass from Eller on the power play to put the Capitals ahead 3-2 at 14:32 of the second.

Oshie ended a 13-game goal drought when he scored on the power play at 5:28 of the third period to make it 4-2.

“You don’t really see it on the score sheet how well [Stephenson’s] been playing for us this year,” Oshie said. “But those are the type of things that are going to be important for us down the stretch here, to use our depth. [Stephenson] is a really, really good player, very explosive skater. It was good to see him get those for us, and that’s all on him. He got us going tonight. He’s the star.”

Voracek scored to cut the Capitals lead to 5-3 at 10:40 of the third, but the Flyers had only one shot on goal the rest of the game.

“I thought we evened things out and pushed back and got our game going again through most of the rest of the second period,” Flyers coach Dave Hakstol said. “Even giving up the (Burakovsky) power-play goal. It’s the start of the second that changed the complexion of the hockey game.”