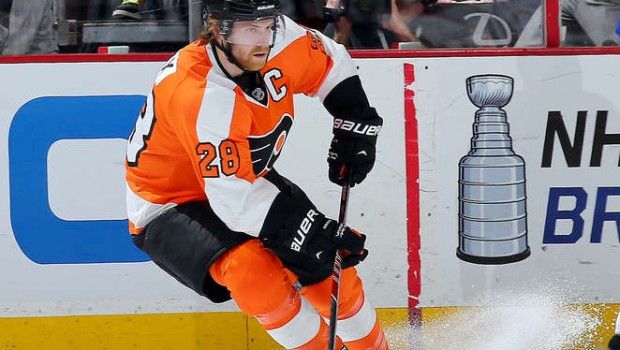 The Flyers can’t make the Stanley Cup playoffs so the most fun they can have is to keep other teams from the postseason.

And that’s just what they did last night at the Wells with he New York Islanders three seconds from making the Stanley Cup Playoffs.

The Islanders (46-28-6) needed one point to secure a spot in the playoffs, and it looked like they were going to get it when they tied the game with 28.0 seconds remaining on Anders Lee’s second goal of the game.

Moments later, Philly forward Sean Couturier pushed a puck ahead to Schenn at center ice. He skated into the New York zone, and as he got into the left circle put a 60-foot shot on goal that eluded New York goaltender Jaroslav Halak.

“It went in,” Halak said. “Don’t know what happened. Hit my stick, thought I had it inside of me; it was behind me. I don’t know. I have to take a look at the video to see what really happened.

“We lost the game. Not a great feeling. Guys did a [heck] of a job at the end, scoring two big goals for us. Then I gave up the bad goal at the end. I’ll take full responsibility for the loss tonight. We all make mistakes. Bad timing for me. Got to shake it off and get ready for the next one.”

The Islanders’ regulation loss, combined with the Ottawa Senators’ 4-3 overtime win against the Pittsburgh Penguins, delayed the Islanders’ chance at getting back to the postseason for the second time in three seasons. It also left the Islanders one point behind the Washington Capitals for second place in the Metropolitan Division and three points ahead of the fourth-place Penguins, who have one game in hand. The Islanders play at the Penguins on Friday.

“It’s a frustrating loss,” Islanders coach Jack Capuano said. “At this time of year you have to have a short memory. You have to move on and get ready for the next one.”

Center Claude Giroux (photo above) had two goals for the Flyers (33-29-18), and defenseman Mark Streit tied a career-best with three assists. Jakub Voracek had two assists, and Pierre-Edouard Bellemare and Carlo Colaiacovo scored.

Steve Mason made 36 saves for his first win in three games against the Islanders this season. He was 0-0-2 entering Tuesday but had one shutout and had stopped 74 of 76 shots.

The Flyers are 4-0-3 in their past seven games, and have three straight wins against teams holding playoff spots.

“We finally figured out how to play,” Streit said. “Took 80 games.”

New York captain John Tavares had a goal and two assists, and Lee scored two goals. Boychuk had a goal, and Halak made 22 saves.

Tavares’ three-point night tied him with Pittsburgh captain Sidney Crosby for the NHL scoring lead with 83 points, and gave Tavares a career-best, topping the 81 points he had in 2011-12.

Voracek’s two-point game gave him 81 points, tied for third in the League.

The Flyers appeared to be in control of the game when Colaiacovo scored 2:45 into the third period to make it 4-1. But Lee’s goal at 8:21 of the third got the Islanders going.

Then came a wild final 1:44 when New York scored twice with Halak out of the net. After Philadelphia was called for icing, Tavares beat Bellemare on a faceoff on the right side of the zone. On one knee, Tavares got the puck to Boychuk at the point, and his off-balance shot through traffic got past Mason at 18:16.

After the Flyers iced the puck again with 30.9 seconds left, Tavares beat Giroux on a faceoff in the right circle and got the puck to an open Lee in front of the goal. He made a quick move and put the puck past Mason.

“Definitely with the goalie out there, there were a couple opportunities to put the puck down the wall,” Flyers coach Craig Berube said. “[Jakub] on the one play is trying to score. Be a little smarter with it. They’ve just got to be smarter.”

Berube said he started focusing on overtime and wasn’t paying much attention as the final seconds ticked off. So he heard more than saw Schenn’s winner.

“That’s why I always tell these guys, put the puck on net and you never know,” Berube said.

Schenn said he wasn’t thinking about a goal in that situation, instead trying to be smart with the puck while running out the clock. Instead he scored his fourth goal in four games and 18th of the season.

“I know there was obviously not a whole lot of time left so I just tried to get it on net,” Schenn said. “I think [Islanders defenseman Travis] Hamonic had his stick out there and I just tried to drag it around and throw it on net, and I guess I’ll take a lucky one like that.”

Giroux’s fourth two-goal game of the season and 15th of his career NHL gave the Flyers a 2-0 lead in the first period.

Tavares’ power-play goal got the Islanders within 2-1 at 9:34 of the second period, but that was the only man-advantage goal they scored in five chances against a Flyers penalty-killing unit that ranked 29th entering Tuesday. New York had five shots on goal on the power play, including one on a 59-second two-man advantage in the first period.

“Wasn’t very good,” Capuano said. “We had a 5-on-3, could have changed the mindset of the game. The power play and the penalty kill, it’s all about timely goals. We had a chance and we didn’t get it done.”

Bellemare made it 3-1 when he scored off a centering pass by Vincent Lecavalier at 10:46 of the second. Colaiacovo’s goal, off a no-look backhand pass by Zac Rinaldo as he skated toward the wall, gave Philadelphia a 4-1 lead.

The Flyers have home games remaining against the Carolina Hurricanes on Thursday and the Ottawa Senators on Saturday. Since the All-Star break, the Flyers are 11-2-5 against teams holding a playoff spot, but 3-5-6 against those outside the playoffs, where Carolina and Ottawa are.

“We are showing some pretty good character in this room,” Schenn said. “Lately there’s definitely no quit no matter what the circumstances are around here … playing for one another, playing for the fans and playing for pride. We have one more or two more games left and trying to end the season on a positive note.”