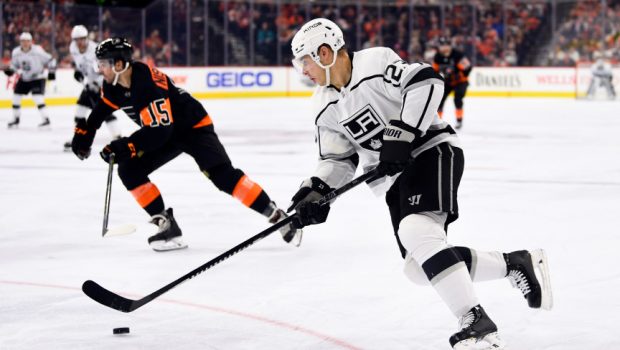 Travis Konecny scored two goals and James van Riemsdyk had a goal and two assists in the Flyers 4-1 victory over the visiting Kings.

Joel Farabee also scored and Brian Elliott made 34 saves for the Flyers, who improved to 16-4-4 at home.

Claude Giroux, who centered the line with Konecny and van Riemsdyk, had a pair of assists.

“I was looking for something else,” Vigneault said after the Flyers’ 4-1 home defeat to Montreal on Thursday. “Putting (Giroux) back in the middle as an option we had and it worked out tonight.”

Giroux previously was a winger on the top line before taking Kevin Hayes’ place in the middle, with Hayes moving to that spot on the third line and van Riemsdyk coming up to the No. 1 unit.

“Yeah they’re good players,” Giroux said. “It’s fun to play with them. They both know how to score goals. I know it’s only one game, but you can see we have chemistry. We need to build off this.”

Konecny notched his second of the game and 17th of the season early in the second period when he fired a hard wrist shot from the front of the crease past Jack Campbell’s glove side. Van Riemsdyk put a perfect pass on Konecny’s stick from behind the net.

Earlier, Konecny put the Flyers on the board 3:48 into the contest when he finished a 2-on-1 with a one-timer from the slot after being set up nicely by van Riemsdyk.

“It felt good,” Konecny said. “It’s nice when you get some opportunities early in the game. It kind of gets your feet going. Our line was moving pretty good tonight.”

Elliott, the Flyers’ backup, is playing after No. 1 netminder Carter Hart was injured in practice Tuesday. Hart missed his third game and is expected to be out for two to three weeks with an abdominal injury. Elliott said the Flyers played a more complete game overall than Thursday.

“Blocking shots and allowing me to see pucks, that was a big difference,” he said. “It allows you to swallow up some of the rebounds that normally would be there, regroup and win the next faceoff. We did a good job of that and we buried our chances. Guys had some hot sticks tonight.”

Dustin Brown scored for Los Angeles, which enters a much-needed 10-day break after losing its fourth in a row and seventh in eight games. The Kings entered in the cellar in the Western Conference and tied for the third-fewest points in the league with 41. They ended a five-game road trip 1-3-1.

“We’ve played some really good teams and we’re learning how to be a really good team,” Brown said. “We have to take lessons from every game. It’s frustrating, but it’s important we figure out how to get better.”

The Flyers went ahead 3-0 with a pair of second-period tallies.

In addition to Konecny’s goal, Farabee recorded his fifth of the season, getting some good fortune when Matt Niskanen’s slap shot from the point deflected off his skate and past Campbell for a power-play goal with 7:52 left in the period.

Philadelphia also had a goal disallowed in the period when officials ruled that van Riemsdyk interfered with Campbell before Sean Couturier’s shot crossed the goal line. The officials’ call was upheld after a coach’s challenge.

The teams traded goals in the third period, with van Riemsdyk scoring on a deflection with 11:41 remaining. It was van Riemsdyk’s first goal in 13 games and second three-point game of the season.

Three minutes earlier, Brown put the Kings on the board by going high over Elliott’s blocker side after beating Niskanen down the wing. Brown, who has spent his entire career with the Kings, now has scored against every team in the NHL.

The Kings dropped to 0-19-1 when trailing after the first period, remaining the only team in the NHL not to have come back from a first-period deficit.