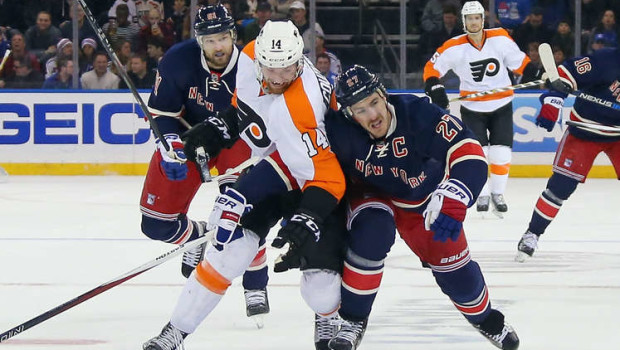 Could this be the game that breaks the fever on Flyers failure this season?

Right wing Wayne Simmonds scored two goals and had an assist after going the previous six without a point. Center Sean Couturier (above) scored his first goal since Oct. 20, a span of 14 games for him because he also missed six with an injury. Goalie Steve Mason made 24 saves for his first shutout of the season.

And the Flyers beat the New York Rangers 3-0 at Madison Square Garden for their first two-game winning streak since Oct. 21-24 and their first win at the Garden since Feb. 20, 2011, ending a 10-game losing streak here.

The Flyers (9-10-5) also defeated the Nashville Predators 3-2 in overtime Friday.

“It’s kind of a monkey off your back,” said Flyers forward Matt Read, who had an assist on Simmonds’ first goal. “It’s a matter of coming in here and playing a full 60 minutes. You give them anything and the crowd gets back into it and you never know what goes on from there. You have to play a full 60 and shut down every opportunity they have.”

Mason said he could tell a difference in the Flyers’ mentality while watching from the bench as the backup to Michal Neuvirth on Friday. He could feel it even more being on the ice Saturday.

“There are moments of real good hockey and moments we fall back, but I thought [Friday] afternoon and especially [Saturday] we were the hungrier team it looked like,” Mason said. “The boys weren’t giving them any time and space. I thought our ‘D’ zone was real solid. That’s the effort level we need to have. You get rewarded for it.”

The Rangers (16-6-2) have lost three in a row in regulation for the first time this season. They were 13-1-1 in their previous 15 games before the losing streak started.

New York goalie Antti Raanta made 31 saves in losing for the first time in five starts this season. It was Raanta’s first regulation loss in a home start in his NHL career. He was 17-0-3 in 23 home appearances, including 18 with the Chicago Blackhawks.

The Rangers were shut out for the second time this season. They have also been outshot in 15 of 24 games this season.

“We probably have gotten some of those wins because of extraordinary goaltending,” Rangers coach Alain Vigneault said. “I thought we had another extraordinary goaltending performance [Saturday], but the rest of our game was absent in the second and the third. We all learn lessons as individuals and as teams. I think we’ve gotten one [Saturday] and hopefully we’ll be good next game.”

The Rangers have a chance to break out of it against the Carolina Hurricanes at the Garden on Monday. It’ll be their seventh game in a stretch when they’re playing nine in 15 days.

The Flyers have had that confidence for the better part of the past few weeks. It finally led to some wins this weekend. They’ll go their third straight at the Ottawa Senators on Tuesday. They can only hope the line featuring Simmonds, Couturier and Read can stay hot.

“Today is a huge stepping stone for us,” Simmonds said. “We got a big win in Madison Square Garden and we have to keep that in our head, this mentality that we’ve had the last two games.”

Simmonds opened the scoring at 12:24 of the second period with a breakaway goal off a give-and-go play with Read. It was the key moment in a dominating period by the Flyers. In addition to scoring, the Flyers outshot the Rangers 18-7 in the second.

Couturier gave the Flyers a 2-0 lead when he scored off a rebound of Simmonds’ shot at 3:06 of the third period. Raanta made a pad save, but the puck came to Couturier in the slot and he shoveled it in.

“Our line, minus the stats, the last 10 or 15 games, I thought we’ve been on our toes, creating opportunities, playing good hockey and nothing has really gone our way,” Read said. “We talk everyday like, ‘Hey, just keep going, things are going to start going our way.’ [Simmonds] had a great game. [Couturier] had a great game. We played with speed. I think all 20 guys played a full 60 minutes, which we need to do more often.”

The Rangers, though, had Philly on its heels for most of the first 20 minutes. They had a 10-4 edge in shots on goal, including 8-1 after defenseman Dylan McIlrath’s hit on Flyers defenseman Nick Schultz that subsequently resulted in a power play for New York at 10:58.

Flyers defenseman Luke Schenn immediately went to fight McIlrath after the hit. Schenn received 17 minutes in penalties, including a minor for instigating.

Schultz left the game with an upper-body injury and did not return. The Flyers killed the penalty, plus another one that bridged the first and second period. They have killed 19 straight power plays.

“[The first period] is when they had their biggest push, but you look at the game as a whole, I thought our energy level and compete throughout the whole entire game was a huge factor,” Mason said. “We weathered a storm in the first period and kept pushing through. That set us up for the rest of the game.”