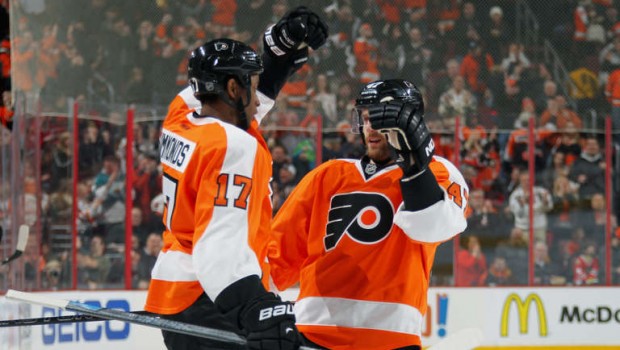 FLYERS KNOCK OFF HAWKS, STILL 7 PTS. OUT OF PLAYOFFS, 7 TO PLAY

Even after the Flyers were savoring their 4-1 win against the Chicago Blackhawks on Wednesday at Wells Fargo Center, their place in the standings hit home:.

Captain Claude Giroux, who was one of four goal-scorers, repeatedly used the word “frustrating” to describe the game, which is a microcosm of the Flyers’ season.

The Flyers (30-29-16) moved within nine points of the idle Ottawa Senators for the second wild card into the Stanley Cup Playoffs from the Eastern Conference with seven games remaining.

To get any closer, they’ll have to do it without Simmonds, who scored his 28th goal. He sustained a lower-body injury that will keep him out for the rest of the regular season. The injury occurred when Simmonds was hit in the left foot by a puck, according to the Courier-Post.

The Flyers also lost defenseman Andrew MacDonald, who sustained an upper-body injury that will keep him out the rest of the regular season. The Courier-Post reported the injury is to MacDonald’s right hand.

“It’s very frustrating,” Giroux said. “I’d like to tell you why, but it’s a frustrating thing that we’re not in the playoffs. We know we can play against good teams. Feels like when we’re ready to play we play our best games. It’s definitely frustrating.”

Chicago (44-23-6) got a power-play goal from Andrew Shaw. Goaltender Corey Crawford made 28 saves.

The Blackhawks played most of the third period without forward Joakim Nordstrom because of an undisclosed injury. Coach Joel Quenneville said more would be known about his injury Thursday.

The loss leaves the Blackhawks third in the Central Division, four points behind the second-place Nashville Predators and five behind the first-place St. Louis Blues. They’re also three points ahead of the fourth-place Minnesota Wild.

The Flyers feel they have a team good enough to make the playoffs, but the inconsistencies that have plagued them all season are what likely will keep them home this spring.

“At this point winning feels good,” Mason said. “However there is that sobering feeling of where we’re at in the standings. Tonight was an effort that you look back on and you can be proud of the effort.

“We know what type of team we can be. We’ve seen glimpses of it. But the consistency was the big issue. Moving into next season and beyond that’s something we have to take care of, the consistency. When guys are on their game we’re a good team.”

They showed that Wednesday, scoring the first goal on a strong forecheck led by the line of Simmonds, Matt Read and Sean Couturier that ended when Simmonds took a cross-ice pass from Read and put a shot past Crawford 7:20 into the game. It was his 100th goal with the Flyers.

White made it 2-0 at 7:09 of the second period when he got into the slot and tipped a Carlo Colaiacovo shot past Crawford. It was his fifth goal in 27 games this season; he had five goals in his first 141 games.

Giroux made it 3-0 when he drove to the net to tip a centering pass by Jakub Voracek past Crawford.

The assist gave Voracek 74 points, tying him with New York Islanders center John Tavares and the Pittsburgh Penguinscenter Sidney Crosby for the League scoring lead. The Flyers have never had an Art Ross Trophy winner.

The goal was Giroux’s fourth in three games but first at home at even strength in nearly a year, since March 28, 2014, against the Toronto Maple Leafs.

The Blackhawks are looking to start doing good things as well. They finished a four-game road trip 2-2-0 but scored five goals, with three of them coming in a 3-1 win against the Carolina Hurricanes on Monday.

“We’re not a group that makes excuses,” Blackhawks captain Jonathan Toews said. “We know the last few efforts haven’t been good enough. The goaltender has been keeping us alive in these games. Could have been worse than it was tonight. It’s a tough stretch. We haven’t played well on this road trip. As a group we’ll figure out what’s going on and what we have to do better and what we have to do everyone firing and get all four lines engaged.”

Quenneville tried a few different things, including replacing forwards Teuvo Teravainen and Bryan Bickell with Daniel Carcillo and Andrew Desjardins. He placed Kris Versteeg on the top line with Toews and Brandon Saad after starting the game with Andrew Shaw in that spot.

“Our production has been way off,” Quenneville said. “We tried some different things. We had some good looks, but we didn’t get shots through. Missed some opportunities too. Got to get to the front of the net, got to get greasy goals. They got a couple tips that went their way because they got inside. We were too much on the outside.”

The Blackhawks had another power play after Shaw’s goal, but their best chance came when Toews hit the post with a shot from the right side.

Philly closed the scoring with Raffl’s 19th goal of the season, and his first NHL power-play goal, with 4:05 remaining in the third period.

The Blackhawks almost certainly will make the playoffs for a seventh straight season and are trying to climb as high as they can in the division. Their deficit behind the Central leaders isn’t huge, but with nine games left they know there isn’t a lot of time left to make up ground.

“It is what it is,” Toews said. “You’ve got to focus on playing good hockey. When we do that we give ourselves a chance to win games. Win games and then maybe we”ll have a chance at the end. You can’t worry about something like (the division title) when we’re not playing our best hockey down the stretch. We’ll figure things out together the way we always do and get back on the right page.”