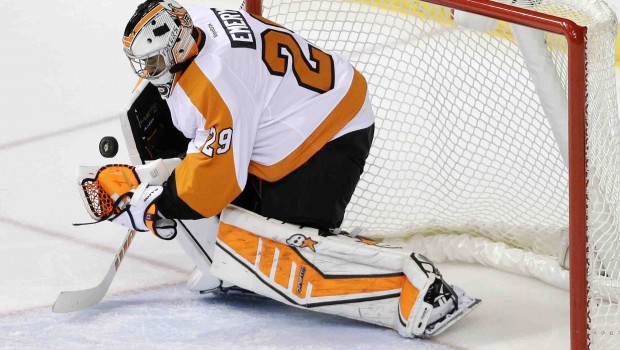 FLYERS KILLED AGAIN BY THE PK IN NASHVILLE, LOSE 4-1

With Steve Mason not due back until Monday, Ray Emery was in net against the Preds.

The Flyers came into Nashville with a three-game winning streak and a head of steam for the first time this season.

They left with a 4-1 loss to the Predators that raised lots of questions about the Flyers’ ability to kill penalties.

Which amounts to none.

They were the seventh-best team in hockey killing penalties last season and are sitting 29th among 30 teams this year after an atrocious night against the Preds.

Nashville went into the game with the second-to-worst power play in hockey and it had scored just two power-play goals at home all season.

Against the Flyers, rookie winger Filip Forsberg scored the opening goal on the Preds’ first power play, then in the second period Nashville used a 5-on-3 power play to turn a tie game into a 3-1 lead.

“Obviously you look at the way things ended up and them getting a few power play goals, it obviously looks real bad on us,” said Flyers defenseman Luke Schenn, who was on the ice for Nashville’s first and third power-play goals. “We’re going to have to go back and figure out what we’re doing on it.”

Actually, the Flyers should have figured this out by now because they’re 35 games into the season.

What’s baffling is the Flyers pretty much are using the same guys on the PK as last season and they have the same assistant coach running the unit, Ian Laperriere.

“I’m not baffled,” Flyers coach Craig Berube said. “We gotta do a better job. It’s little things for me. Faceoffs. Clears. Things like that catch up to you. When we do a good job on faceoffs, clearing pucks and blocking shots and being in lanes, we kill the penalties. It’s just a matter of commitment of doing it all the time.”

The Flyers’ power play was a problem in this loss, as well, because it was 0-for-4 with a failed 58-second 5-on-3 to start the second period, but Preds goalie Pekka Rinni, probably the best in the game this season, had a lot to do with that.

But there’s no excuse for the Flyers’ penalty killers allowing three goals to the Preds, who went into the game with 12 power plays for the season.

“I don’t know what it is,” Flyers forward Matt Read said. “If I knew, we wouldn’t be struggling. We’re working hard. We’re doing the right things out there. It’s just a simple thing of being in the right spot or taking the away the right passing lane. It seems like every little mistake ends up in the back of our net.

“We gotta keep working at it. I don’t think it’s far off from being really good.”