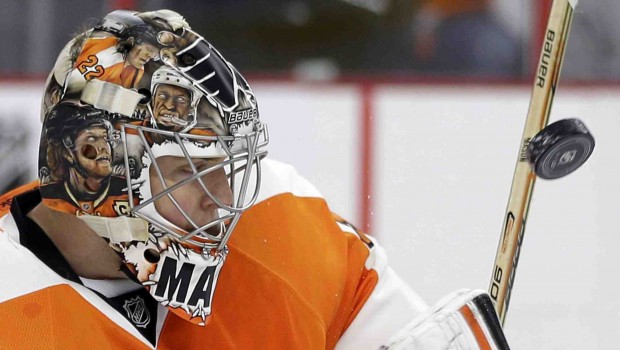 FLYERS HOPING TO START A STREAK AGAINST ISLANDERS TONIGHT

The Flyers head to Brooklyn tonight to face the Islanders with a new zip in their attitude hoping to start a winning streak.

The Islanders (10-8-3) gave up nine goals in back-to-back losses to Montreal and faltered late in a 4-2 road defeat Sunday. The Canadiens scored the tiebreaking goal with 3:29 remaining, their third on the power play, and had a short-handed score in the second period.

“I thought we battled and played well. I thought we should have got a better outcome,” defenseman Johnny Boychuk said. “We just have to continue to bear down and do a good job on our special teams because they’re usually good.”

The Flyers, meanwhile, converted a pair of power plays and captain Claude Giroux tallied a short-handed goal in a 3-2 overtime victory over Carolina on Monday.

Brayden Schenn ended the Flyers’ scoreless drought at 167:54 – the fifth-longest in franchise history – before the Flyers (7-9-5) allowed the Hurricanes to rally. Shayne Gostisbehere snapped Philly’s three-game skid and gave the team its third win in 14 games just 24 seconds into the extra period.

The Flyers still have plenty of work to do to increase their 1.76 goals per game. They totaled a franchise-worst 34 in their first 20 games.

Drawing more penalties could prove one successful method as the team has a respectable 23.1 percent conversion rate on the man advantage in the last eight contests. Philly has also killed all 12 penalties in its past three.

“We’re pushing a lot of small areas in the right direction. We just have to keep pushing,” first-year coach Dave Hakstol said. “I think the feeling and the focus in the locker room is good. Nobody’s comfortable with the won-loss record, and that’s a good thing.”

The Islanders rallied then faltered just before the buzzer in the latest matchup with the Flyers, a 5-4 loss on April 7 that ended a four-game win streak in the series. Schenn scored the winning goal with 2.1 seconds left after New York found the net twice in the prior two minutes, including Anders Lee’s equalizer with 28 seconds remaining.

In its first visit to Brooklyn’s Barclays Center, Philadelphia seeks back-to-back wins for just the third time this season and first since Oct. 21 and 24. The Islanders took each of the last three meetings at the old Nassau Coliseum, registering a 7-4 victory in the final one Jan. 19.

Giroux’s 37 points versus the Islanders are his most against any opponent and his 11 goals are tied for his second-most behind his 15 against Washington. He scored two goals in the win in April.