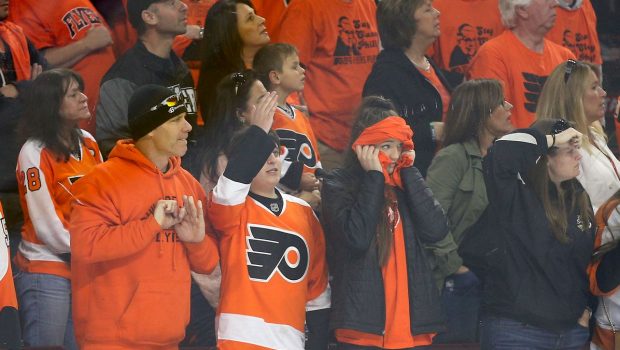 FLYERS HAVE FALLEN TO 4TH IN PHILLY FOOD CHAIN: HOW? WHY?

The Flyers missed the playoffs for the second time in the last three seasons after posting a 37-37-8 record for a 22nd overall finish. The club was 16 points out of the playoff picture in mid-January, but a run of 18-4-2 got them within three points of a Wild Card spot with 13 games remaining. However, a late-season slide knocked them out of the hunt. The Flyers have earned a spot in the postseason twice in the past five years and both times they were defeated in the first round.

Their poor start to the 2018-19 season played a big part in the team’s failure to qualify for the Stanley Cup Playoffs. The Flyers were just 15-18-5 through the first three months. The team was last in the Eastern Conference, with a mark of 12-15-4, when head coach Dave Hakstol was fired. He managed to rally the team in two of his first three seasons, but didn’t get the chance this time around.

They named Scott Gordon the interim bench boss afterward and he did a good job helping to the team get back on track. Gordon’s defensive system and some much-needed stability in net helped the team lower their goals-against per game from 3.74 to 3.00. The penalty kill was also disastrous prior to Gordon taking over. The Flyers ranked 30th in the league and moved up to 26th overall at the end of the year.

Despite the improvements, Gordon was not the choice to lead themnext season. The Flyers brought in Alain Vigneault to serve as the head coach and Gordon will be behind the bench for Lehigh Valley of the AHL. Michel Therrien and Mike Yeo were also added to the coaching staff as assistants.

The Flyers used an NHL-record eight goaltenders during the 2018-19 campaign, including six before Christmas. Brian Elliott was limited to 26 appearances due to injury, while Michal Neuvirth played in only seven contests. Philadelphia used Anthony Stolarz and Calvin Pickard in double-digit games, while Cam Talbot, Alex Lyon and Mike McKennareceived some starts as well. The team finished with a goals against per game of 3.41, which was the third-most in the league. Something great came out Philadelphia’s mess in the crease, though, when the team turned to 20-year-old rookie Carter Hart. The Flyers’ goalie of the future was called up from Lehigh Valley on Dec. 17 and he won his first two outings. Getting the goalie situation settled helped the Flyers’ turnaround as much as anything. Hart’s arrival to the NHL may have been earlier than the team intended, but the young netminder’s superb play should give the team’s brass plenty of confidence moving forward.

The Flyers registered 2.94 goals for per game, which ranked 18th overall in the league. Claude Giroux topped the team with 85 points and Sean Couturier accounted for 76 points for a second straight season. Jakub Voracek had 66 points for some secondary scoring, but there wasn’t much beyond that. James van Riemsdyk made 66 appearances in his return to Philadelphia because of injury, but he managed to place second on the club with 27 goals and he earned 48 points. The Flyers need more players contributing offensively.

The Flyers have the 11th overall pick in the 2019 NHL Entry Draft. Philadelphia has some very good prospects withMorgan Frost, Isaac Ratcliffe and Joel Farabee. They are not far away from playing at the NHL level.

They have has the talent to get back into the playoffs in 2019-20. Vigneault likes his teams to attack with speed, cycle the puck and score. The Flyers have the personnel to adapt to that kind of offensive structure quickly and the team finally has an answer between the pipes in Hart. They just need to find some consistency and a return to the postseason shouldn’t be a problem.