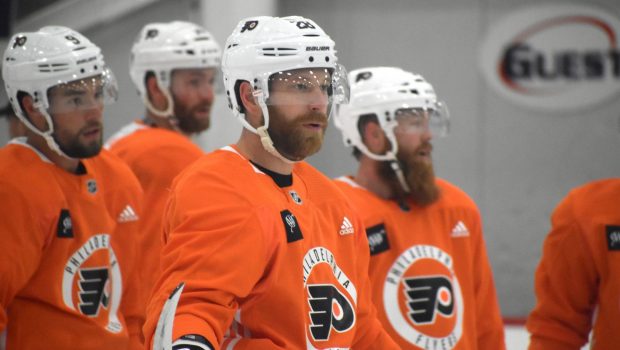 FLYERS HAVE LOTS OF HOPE, BUT HAS ANYTHING REALLY CHANGED?

The Flyers open 2021-22 tonight against the Canucks at the Wells:

Here’s their state of play:

Flyers GM Chuck Fletcher made a lot of moves in the offseason, but has anything really changed?

By most advanced metrics, the Flyers were a respectable team last season. They weren’t really showing signs of being a juggernaut, but a brief playoff appearance wouldn’t have been out of order. Unfortunately, they suffered from the worst goaltending in the NHL.

Carter Hart’s Goals Saved Above Average (-22.57) was by far the worst in the NHL last season. Second worst? Well, that would be his now-former creasemate Brian Elliott (-14.01).

With Hart, the Flyers can hope that he merely puts last season behind him, and regains his form in 2021-22. A rebound isn’t out of the realm of realism.

Still, between Jones and Hart, there’s a lot of wishful thinking. The Flyers must be thinking “Carter Hart can’t be this bad again in 2021-22.” In the case of Jones, they have to hope that Jones wasn’t this bad — it was just about the Sharks.

Goalies are unpredictable, so who knows? But Martin Jones has been wallowing for years now. That ugly -11.71 GSAA is actually his highest mark from the last three seasons. With so much on the line, the 2021-22 Flyers might regret the dubious insurance policy they took out in net.

Plenty of GMs risk the future in hopes that long-term deals will pay off in the present. The Flyers have to hope that Chuck Fletcher’s big swings pay off where they didn’t make contact often enough with the Wild.

There are still some lingering decisions, however.

Overall, the Flyers’ salary cap situation is a mix of good and bad. If there’s one undeniable thing, it’s that this isn’t a cheap operation. Don’t be surprised if patience dries up along with this team’s cap space.

Carter Hart enjoys a brilliant rebound, and Jones regains his confidence enough to be a solid backup. Those big changes translate into a dynamic defense. Vigneault pushes all the right buttons, including rekindling what was once a deadly power play. The Flyers make a legit push to win their division, and rank as a dangerous playoff opponent.

Hart and Jones are basically as porous as they were last season. The Flyers regret ignoring the red flags with Ristolainen. Injuries greatly limit Ellis, who was once borderline-elite. Remember those meltdowns against the Rangers? That happens far too often, and against far too many foes. The Flyers fail in 2021-22, and then make a bunch of panic moves as a result.