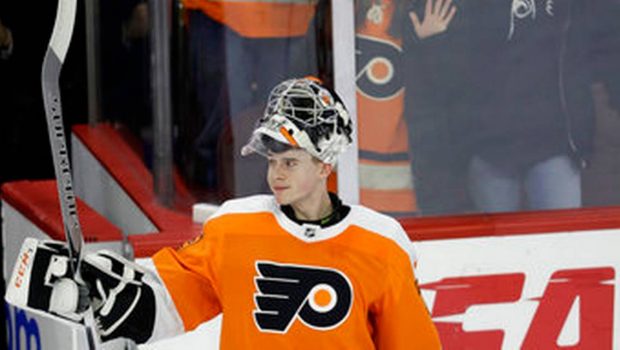 Twenty-year-old Flyers goaltender Connor Hart has made 53 saves in winning his first two NHL starts — which have also coincided with a coaching change.

“He’s the main reason we won the last two games,” Jake Voracek said after Thursday night’s 2-1 win over the Nashville Predators made Scott Gordon 2-0 as the Flyers’ interim coach.

Said Hart, who will try to keep it going with the Columbus Blue Jackets in town for a Saturday matinee: “I’m competing and having fun.”

He looked particularly sharp during a Nashville 5-on-3 advantage, with Ryan Johansen saying, “We had some good looks. The young kid in net made some good saves, made our 5-on-3 look bad.”

Having a homestand at the time of the coaching and goaltending change has to have helped things get off on the right skate for both Gordon and Hart, the latter the sixth goalie to play for the Flyers this season.

He plays his third straight, but what will happen tomorrow on the back end of a back-to-back against the Rangers in New York?

“We don’t have to make a decision as far as what Sunday is going to be,” Gordon said. “Carter will start (Saturday) and we will get through the game and figure it out afterward.”

Bobrovsky, who has already defeated the Flyers twice this season, has allowed one goal in the last two games, both wins, as the Jackets have won three of their last four (points in all four) as they visit Philly.

“It’s not only me, it’s the team,” he said. “I think the team improved a lot in front of me. It (trickles) down to me too and my result and my numbers get better too. I think we win as a team, we lose as a team. It’s tough to break down by the pieces and say we win or lose because of one person. We have one logo on the chest and the result goes to the whole team.”