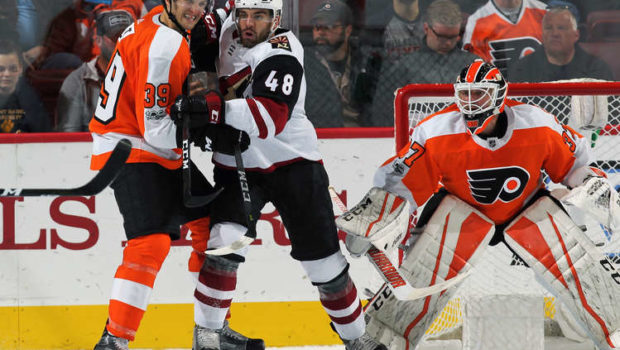 FLYERS HAND COYOTES THEIR 1ST WIN OF THE SEASON 4-3!

Alex Goligoski scored with 14.4 seconds left in overtime, and Arizona overcame blowing a three-goal lead in the third period to defeat the Flyers 4-3 for its first victory of the season.

The Coyotes (1-10-1) avoided setting an NHL record with a 12th straight loss to start a season. They were tied with the 1943-44 New York Rangers, who started with 11 straight losses before tying their 12th game.

Arizona led 3-1 with less than a minute left. But with Flyers goaltender Brian Elliott pulled for an extra attacker, Jordan Weal scored with 53 seconds remaining to cut the lead to 3-2.

The Flyers continued to pressure with Elliott on the bench, and Sean Couturier scored his second goal of the game with 16 seconds left to tie it 3-3.

After killing a hooking penalty against Jakub Voracek in overtime, the Flyers (6-5-1) allowed an odd-man rush. Max Domi got the puck to rookie Clayton Keller, who passed to Goligoski for a one-timer past Elliott for his first goal of the season.

“It just feels good to get a win,” Goligoski said.

Keller extended his point streak to six games with the assist on the game-winner. He has four goals and four assists in that span.

Jordan Martinook (2:20) and Christian Dvorak (7:46) each scored his first goal of the season in the first period to put the Coyotes ahead 2-0, and Brendan Perlini scored a power-play goal at 1:34 of the third period to make it 3-0.

The Flyers had three shots on goal in the first period and 13 through the second.

Couturier scored a power-play goal at 2:14 of the third period to make it 3-1. His nine goals lead Philadelphia, which has lost three of its past four games (1-2-1).

Flyers defenseman Ivan Provorov had the first three-assist game of his NHL career.

Coyotes defenseman Niklas Hjalmarsson had two assists but left the game at 8:36 of the third period after he was hit in the face by Flyers forward Travis Konecny’s stick. Tocchet didn’t have an update.

“It’s pretty frustrating the way we lost,” Couturier said, “but at the same time, it’s a big point that we didn’t deserve at all.”