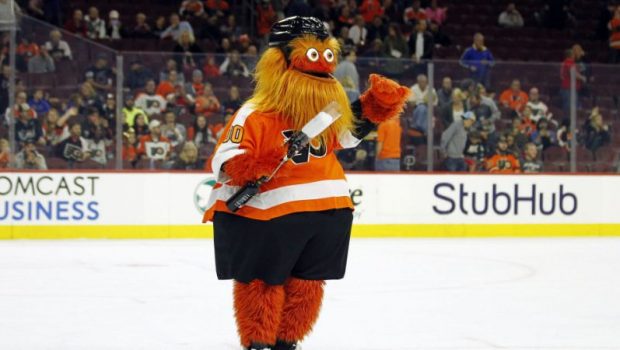 FLYERS GRITTY HAS TAKEN THE NHL (AND THE COUNTRY) BY STORM!

Gritty has schmoozed with Jimmy Fallon, given a bushy bro hug to the Phillie Phanatic and seen his wild-haired, googly-eyed, fuzzy face plastered on beer cans, protest signs and even as tattoos.

Gritty’s been loved and lampooned, swept into politics and become more than just an orange face that turned into a No. 1-trending hashtag.

There’s little need to play 82 games this season to find the NHL rookie of the year: it’s Gritty.

Even the commish admits he’s a Gritty Guy.

”If he’s supposed to bring attention to the game, I think he’s done a pretty good job of doing that,” NHL Commissioner Gary Bettman said.

Gritty’s been in your face (and invaded your dreams ) since his debut last week.

Gritty got off to a slow start when the Flyers unveiled him with a stock photo of a menacing mascot that made him look like more like the cold-blooded Pennywise than a lovable monster that a kid would want to hug.

Gritty can’t be blamed for looking more threatening than the Flyers’ Stanley Cup chances once he stumbled out of captivity. The Flyers say Gritty was found by the team in his secret hideout during offseason renovations at the Wells Fargo Center.

His father was a ”bully,” and his unkempt beard suggests he may have arisen from the ashes of the Flyers’ long-ago home, the Spectrum. And those crossed-eyes? Well, yours would be too if you spent all that time trapped trying to find Patrick Kane‘s Game 6 goal.

But the truth is, the Flyers had missed out on the in-game frivolity, the merchandise revenue streams and the community outreach programs that result from a marketable mascot. At the 2016 NHL All-Star game in Nashville, Tennessee, the Flyers’ marketing department saw the rest of the league’s mascots – like Bailey the Lion, S.J. Sharkie and Stormy – competing in various games and realized it was time to make a mascot from myth to reality.

The Flyers had tried a mascot before, but Slapshot lasted just one season in 1976.

”Our players, the Flyers’ wives, the alumni, you can only ask them to do so much,” said Joe Heller, Flyers’ vice president of marketing. ”We felt that there is so much more we could do by creating a mascot program.”

Some mascots are obvious: The Panthers mascot is, well, a panther. The New Jersey Devils? Yup, a Devil. The Arizona Coyotes mascot is … wait for it … a coyote!

The Flyers were stumped.

”It didn’t seem like any animal or person would fit what a Flyer would be,” Heller said.

The Flyers didn’t have to search far for inspiration: the mascot gold standard – make that, the green, potbellied, red-tongue and big-beaked, ATV wheeling mascot standard – was launching hot dogs and dancing on dugouts across the street.

The Flyers leaned on advice from character branding consultant Dave Raymond, better known as the founding father of the Phillie Phanatic for the baseball team. Raymond played the Phanatic for 15 years and has helped franchises decide everything from character development to choosing the person inside that XXXXXXL jersey.

Raymond said the best mascots are as synonymous with their teams as their Hall of Fame players, such as the Phanatic, Brutus Buckeye or the Suns gorilla.

”I really believe Gritty is on a path to becoming that,” Raymond said.

The Flyers considered over 100 options before they settled on a sketch from freelance designer Brian Allen of Flyland Designs.

”I began the project by sketching over 20 different possible mascots, including, bats, bulls, groundhogs, dragons, tough guys, yetis, and even a flying squirrel,” Allen wrote on his website. ”Once the client saw the sketches, they picked a big dumpy monster I had drawn as the starting point.”

Character Translations, in suburban Philly, created the outfit that includes 33 1/2 size skates and a size 58 jersey.

The name was decided over the summer by team president Paul Holmgren.

”(He) chimed in, ‘How great would it be if we named our mascot Gritty?” Heller said.

Just like that, a social media star was hatched.

”He’s getting a ton of attention, and I suppose that’s what mascots are supposed to do,” Bettman said. ”Looking at social media, he has admirers and he has doubters, but it looks like the greater Philadelphia community and in particular the Philadelphia hockey community has embraced him.”

Yes, a GoFundMe page was set up to euthanize Gritty. And comedian Jon Oliver said Gritty ”looks like the end result of the orange McDonald’s Fry Guy hooking up with Grimace.”

But Philadelphia’s new director of fun won over the city in his debut when he bit it on skates and fell on his fuzzy rear at a preseason game. Gritty’s been carved on pumpkins, made beer menus and palled around with Flyers stars Claude Giroux and Wayne Simmonds . He made it into HQ Trivia and has nearly 120,000 Twitter followers in just 10 days.

”I don’t think we have our arms around everything that’s out there,” Heller said.

Gritty’s going to throw his around everyone he can – and wins fans over one furry hug at a time.